Skip to content
Home / Delve into the Depths in the Kobold Blog / Your Whispering Homunculus: The Undiscovered Bestiary—Purple Worms, Part One 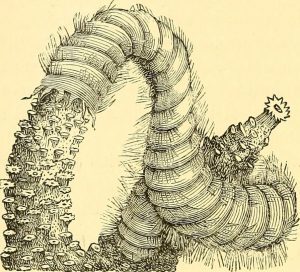 “I’m back from the Monster Mart, sluglet. Quickly! Get me the largest jar from the oozery!”

“Did you say Monster Mart, master? I thought you said Monster Mart, and that would be just silly. Eurgh, what’s that bag got in it? They look like tiny, slithering violet worms. Hundreds of them.”

“Purple worm young, grotlet. A whole bag of wormlets! And Vermis horribilis purpureus even! Their owner had no idea how rare a breed he has. They’ll fetch a hundred gold each when they reach maturity, assuming they don’t get out and eat us first.”

I have fond memories of purple worms.

Now I know that might seem an odd thing to say, but they say something about fantasy gaming and its history. They are soaked in its roots and traditions, bless them. I mean, they were tough—still are tough—and unmistakably “dungeony.” Imagine seeing something vast and serpentesque and feral coiling toward you in some dank, dark place far below the ground. Eurgh…

This edition of Undiscovered Bestiary focuses upon the frightful and beautiful purple worm. It uses the Pathfinder Roleplaying Game system as its rule of choice, but the tweaks to the standard purple worm of old can readily be squeezed to fit your own system using these templates as suggestions.

“Tormin struck the foul creature, cleaving it a hefty blow with his mighty axe, but as he did, the thing’s side opened up, and a steaming shower of caustic violet acid erupted. Where once our friend had stood, now there was nothing but gore and formless flesh.”

This much-feared but fortunately rarely encountered creature was thought legend until the renowned hunter and showman Grakus Q. Bollwart displayed a live specimen at his Museum of Living Colossi and gave his name to the creature. When struck with piercing and slashing weapons, it erupts acidic blood. Fortunately, its skin is so thick that only critical hits cause truly frightening showers of the caustic blood that courses through this foul thing’s body.

Caustic Blood (Ex) When the creature is subject to a critical hit from a weapon or natural attack that is does either piercing or slashing damage, the worm’s skin bursts, spraying highly potent acid in a 10-ft. square adjacent to the wound. Those caught within this area must make a Reflex save (DC 20) or suffer 6d6 acid damage.

“The thing looks bloated and bruised. Its foul taught skin sick against its chitin. Its ugly mouth bloated with jagged teeth—so many that it looks like they couldn’t possibly fit in the vast angry space. As the mouth opens, a foul line of gruel spittle lashes out, grabbing Lerry and drawing him back into the foul livid mouth. He is gone in a second.”

The dangerous bruised spitting worm is the same size and temperament as a standard purple worm but with one deadly addition—its ability to spit an adhesive, foul saliva that it sucks back into its maw to feed on whatever is attached.

Spittle (Ex) Once per round, a bruised spitting purple worm is able to spit out a thick line of saliva at any target up to 30 ft. away. The spittle deals no damage but can be used to grab. The worm does not gain the grappled condition while using its spittle attack in this manner. The worm is able to use this attack and pull up to 2 Large or 4 Medium creatures at a time. The spittle can be cut by inflicting 12 points of damage to it.