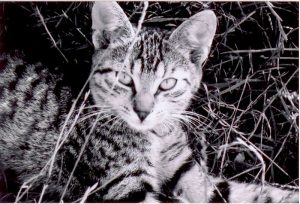 Enock stumbled through the forest, the bite wound on his left leg burned. He continuously scanned his surroundings for his catlike assailant. There was a startling black flash to his left, and he raised his crossbow. There it was, peering around a tree. Enock lined up his shot, but the cat brazenly stepped out of hiding and cantered towards him. Enock squeezed the trigger at point blank range. Tthe crossbow’s quarrel sank deep into the cat’s chest—the black cat collapsing to its knees, mewling. “Got you,” Enock smiled, reaching for another bolt. There was a sudden weight upon his shoulder and hot liquid across his face; Enock tumbled toward the forest floor…

The shadowcat maintained its hold upon the hunter’s neck until the legs stopped twitching, then it dismissed its shadowy companions and started to feed.

ECOLOGY
Environment any (Plane of Shadow)
Organization solitary, pair, or pack (3–12)
Treasure none

SPECIAL ABILITIES
Pride of One (Su) Once per day, as a standard action, a shadowcat can conjure up to 1d4+1 shadowy duplicates of itself. These duplicates function as if created by the greater shadow conjuration spell (CL 20). A Will save against DC 20 reveals the truth of these additional shadowcats.

Shadow Jumper (Su) Once per day, a shadowcat can use the planeshift spell to transport itself to or from the Plane of Shadow.

A shadowcat shares many features of an ordinary cat, although it is significantly larger. A shadowcat’s fur is black with grey streaks and its pointed ears are relatively large compared to its head. Yellow, pupil-less, eyes easily pierce the darkness of the Plane of Shadow. A mature shadowcat is 3 ft. long and weighs 70 lb.

Shadowcats have a unique ecology: they hunt the Material Plane, but their lairs are on the Plane of Shadow. On the Material Plane, a lone shadowcat limits itself to medium-sized prey or smaller; however, a mated pair or a large pack might target larger prey, but only if they are certain of success. On the Plane of Shadow, shadowcats actively avoid contact with all creatures besides others of their kind. They depend on terrain, and they regularly employ pack and ambush tactics to bring down prey.

A shadowcat can live for up to 25 years and only take one mate during that time. A mated pair produces 2-8 cubs with gestation periods 28 weeks long. Both parents raise the cubs until they are ready to venture out on their own: typically just after 1 year. Female shadowcats band together in large groups until they find a mate; such a group is under the leadership of the strongest female. Male shadowcats are loners until they find a mate. Shadowcat courtship is an intricate affair of social gestures, sometimes requiring years to complete.

The death of a mate drives a shadowcat mad with grief. If the cause of death was unnatural, a shadowcat relentlessly stalks the offender until one of them is dead.