Skip to content
Home / Delve into the Depths in the Kobold Blog / Prepared!: The Vault of Pallon the Pious: A Fifth Edition D&D Location 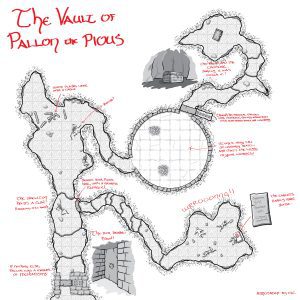 True, I was hired to sail them out past the Witch’s Teeth. Four adventurers looking to earn a name; who was I to throw vinegar on their fancies? I took ’em within a rowboat’s jaunt of the place: the door on the rock. I know as much of the place as any sailor, which is to say—nothing. The man that built that door and its innards was known as Pallon the Pious, a pirate of some renown. Given his actions in life, I don’t know how he made right with any god when he died. The adventurers? Well, I imagine you four want me to take you out. Perhaps you’ll find your answer there…

The Vault of Pallon the Pious is a location designed to offer a medium challenge to four 2nd-level characters.

You stand in the cramped space in front of a stone door built into the face of the rock. A silver cup is fitted into the center of door with a small inscription carved above it. A gull watches you from its nearby perch, its eyes reflecting the dull gray waters.

The inscription reads: Give to Receive. A DC 10 Wisdom (Perception) check uncovers trace amounts of dried blood in the cup. The door slides open when enough blood (from a wound that causes 3 damage to the recipient) is poured into the cup. Smashing the door requires the proper gear, and a DC 15 Strength (Athletics) check followed by two DC 15 Constitution checks. The checks must be made by the same PC.

A tunnel descends down below the water line. The stonework is crude and unfinished, and the floor is littered with loose stones. A thin layer of briny ooze covers most surfaces. At the end of the tunnel, you discover a small chamber containing rotting wooden planks piled in a corner.

Descending the cramped passage, you emerge into a circular chamber with a simple stone altar along the far wall. Scattered on the floor are a dozen stone tablets with carved inscriptions. Four slumping figures occupy the space in front of the altar.

The tablets contain incoherent ramblings and prayers. They are at once exalting the virtues of an unnamed god and threatening to unleash wrath upon wrongdoers. The four figures will stand and turn in unison when the PCs approach. The zombies burble the word “wrong” as they shamble to attack. A DC 10 Intelligence (Investigation) check made on the tablets reveals a cryptic message from Pallon: “Overcoming evil requires much wrongteousness.”

Unlike the entryway, this chamber features carefully built stone walls. Some craftsmanship is evident in the stonework here, and the far wall suggests the frame of a door sealed by rock. Heaps of stones sit on the floor of the room.

A simple examination of the room reveals the stones are inscribed with the word “wrongteous.” The far wall houses the sealed door that leads to the Treasure Room. Beside the door is a hole just large enough to pass a carved stone through. An inscription near the hole reads “do wrong to begin judgment, do wrong again to do right.” Passing a stone marked “wrongteous” through the wall initiates the following:

After the light flashes (for the first time only), three shadows emerge and attack the party. Every round of combat another stone marked “wrongteous” falls into the Judgment Room from a hole above. The party may continue to pass stones through the hole at a rate of one per round. Doing so requires an action. The shadows take the damage each time, but the party risks blindness. When the shadows are defeated, a stone marked “righteous” falls from the ceiling. Passing the “righteous” stone through the hole opens all doors in the vault.

A simple wooden chest sits at the center of this small chamber. Seawater seeps through the walls here, and the smell of the ocean is strong.

The chest contains a silver set of scales and a handwritten note. The note relays the following message, written by Pallon himself: “Here be the truth, all things are not balanced and neither good nor evil can be weighted against the other.” The scales do not work and provide consistently random measurements. They are worth 75 gp.