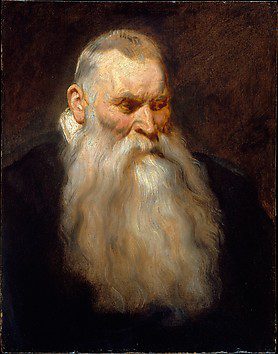 “I think he may have gone, Master. Thank goodness. What was that revolting shambling thing outside?”

Crooked Characters are detailed NPCs to slip into your adventures however you wish. Free from class and statistics, they can be used in any fantasy gaming system. Each comes with a detailed description and character motivation for you to use in your campaign, perhaps as a mere passer-by, a rumor, a confidante, or maybe as the motivation behind a whole adventure.

Eater of spines, feaster of babies

Swishes his scythe as the streets he rambles

Smiles his smile as he devours your ladies

The Shambles offers a useful scapegoat, horror object, and backstory to your adventure, but he could be much more than that; he could be at its heart, bringing a memorably and horribly wronged NPC from the dark depths of your backstory into the unkind and truthful light.

Jebediah—the man—is still kindly. He prays to his god and if given the chance would still happily help strangers. Yet from afar, he appears a one-dimensional being, a killer whose relentless murdering must be stopped. That those in power hold all the cards, bar one, makes his villainy, at least on the surface, blatant. That Jebediah the man is extremely resourceful and tough, as well as driven by a hunger to avenge, makes him a formidable opponent even as a simple foe, but add a few hard-to-find clues and suddenly this man is more than he seems. The odd act of strange kindness, the death of someone not quite as snowy white as they seem, makes him potentially intriguing. Add the fact that he trusts no one and is hardly likely to unmask himself to strangers asking questions makes him a potentially very difficult encounter.

Using Jebediah in Your Adventures

The trick of the obvious being not quite so obvious as it seems gives you the chance to use the Shambles in your adventures. What might start out as a simple hunt soon develops dark twists; the people who offer handsome rewards for his death do not perform such handsome deeds after all. The Shambles’s killing is not quite so indiscriminate, and perhaps there are those who operate in the belly of your campaign—rogues, rebels, and thinkers—who see more to the Shambles than just a killer. They know those he kills by reputation and deed all too well…

Lord Haverstock Gripe, owner of the Outer Seas Colonial Company, has let it be known amongst certain low types in the city that he is offering an extremely generous reward for the death of the menace stalking our decent streets and slaying our neighbors—the villainous and murderous Shambles. Bounty hunters, killers, and mercenaries stalk the streets but have so far met with no success; indeed their investigations have been brutal with several murders in the low-city attributed to these law-bringers. The priestess Essentia Frey, a sister of the nunnery of the Blessed Lady who feed the poor in the low-city, has heard stories that this reviled creature is in truth a lot less worse than those who chase him and those who sponsor them. She seeks people of good character to get to the bottom of the story and confirm a terrible tale whispered to her in confession about a toxin that unmakes bodies. Something she fears may be used again on the poor of the low-city.

The Cabal of Enlightened Venoms have employed a group of assassins to do away with the Shambles once and for all; these silent killers stalk the streets and rooftops looking for their prey. The local thieves’ guild, however, has heard a different story. Their leader—the tough, frightening, but fairly fair Hermastus Crow—has heard the Shambles knows something about the cabal, a group he has begun to wisely fear. They are expanding their operations and seeking to put the guild out of existence. He wants to talk to the man and knows just the people to ask to find him—the PCs…