Skip to content
Home / Delve into the Depths in the Kobold Blog / Memoirs of a Lich: Evocation 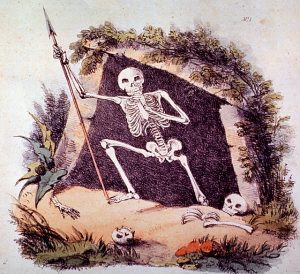 This is Osvaud. I let myself start with illusion (colloquially known as the best school of magic) and then gave myself some time off after the whole mental breakdown after conversion thing. Well then, I guess I’ll move on with my least favorite school of magic… evocation.

Guess what? It is still both horrendously dull and incredibly, annoyingly amazing.

Every arcanist wants to at some point blow up a bunch of unaware enemies from space. Deep down, the second we can cast fireball, we begin dreaming of doofuses clumped up like emperor penguins. Winning in some fraction of six seconds is a surreal, godlike rush.

The difference between most arcanists and evokers is we only recreationally cast fireballs. I mean, not all the time… but, you know… every once in a while. Like, maybe when you are with a bunch of friends, and they are all doing it, and they pass you some bat guano already rolled up into a nice, tight ball. You don’t want to be the one person in the party who isn’t lighting the place up!

Evokers, though, are always chasing the high. It can get real out of control, real quick. Back in the day, we old-timers used to call it “Chasing the White Dragon” because evokers go to crazy lengths to fight a monster with vulnerability to fire. Of course, these days, the saying doesn’t really work. (And chasing the mummy lord doesn’t have the same ring to it.)

I sometimes feel like… maybe if my life had gone a little differently, I could have ended up an evoker too. I am also sure there are a lot of evokers who regret their bad decisions but can no longer see a way out.

Instead of judging, maybe next time try helping. Show them there is more to magic (even evocation) than optimizing damage output against monster resistance and immunity Go slow, and be patient. Here are a few possible ways to get them started on the long road to recovery.

4 thoughts on “Memoirs of a Lich: Evocation”