Skip to content
Home / Delve into the Depths in the Kobold Blog / Tome of Beasts: Water Leaper 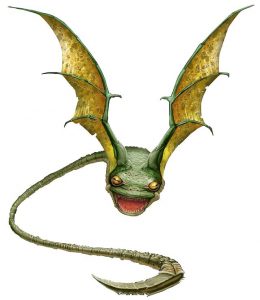 The water leaper is a frogheaded, legless creature with wide batlike wings and a gaping maw. Its shrieks resemble those of a hawk. Its long, sinuous tail tapers and ends in a venomous barb.

Gliding Wings. The creature has no legs or arms, but sports a pair of wide, membranous wings. It uses the wings to glide beneath the water, as well as to soar through the air.

Scourge of Waterways. Water leapers plague fresh lakes and rivers. The creatures prey on animals that come to the water’s edge to drink, as well as on fishermen that ply their trade in the water leaper’s territory. Stories circulate among fishermen of fishing grounds notorious for broken lines and missing bait, and fishermen give these areas a wide berth for fear of water leapers. Desperate or unwary fishermen who ignore the warnings are never seen again; drifting, empty boats are the only sign of their passing.

Amphibious. The water leaper can breathe both air and water.

Camouflage. The water leaper has advantage on Dexterity (Stealth) checks when underwater.

Multiattack. The water leaper uses its shriek and makes one bite attack and one stinger attack.

Bite. Melee Weapon Attack: +5 to hit, reach 5 ft., one target. Hit: 10 (2d6 + 3) piercing damage and the target is grappled (escape DC 13). Until this grapple ends, the target is restrained, and the water leaper can’t bite another target.

Shriek. The water leaper lets out a blood-curdling shriek. Every creature within 40 feet that can hear the water leaper must make a successful DC 12 Constitution saving throw or be frightened until the start of the water leaper’s next turn. A creature that successfully saves against the shriek is immune to the effect for 24 hours.

Stinger. Melee Weapon Attack: +5 to hit, reach 5 ft., one target. Hit: 6 (1d6 + 3) piercing damage and the target must make a successful DC 12 Constitution saving throw or be poisoned for 1 minute. While poisoned in this way, the creature takes 7 (2d6) poison damage at the start of its turn. A poisoned creature repeats the saving throw at the end of its turn, ending the effect on a success.