Skip to content
Home / Delve into the Depths in the Kobold Blog / The Sorcery Stop: Upholders of Uadjet 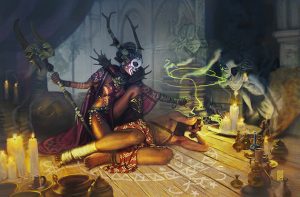 The Serpent Presence. It seems no Sword & Sorcery tale is complete without a pre-human race of serpent-folk and those who would tap their power. Cults of Set, Cults of Yig, the Snake-Men of Kaldar—these tales and more feature encounters with snake people and their leavings. Typically, however, the characters associated with such cults or organizations are definitively villains, associated with horrific rituals, human sacrifice, and other acts of malice.

Despite the above, a player may be interested in portraying a character who is a snake worshipper, and you may not be entirely happy or comfortable in having a sadistic cultist as a PC in your game. What follows is a cult modeled off of the Egyptian snake-goddess Uadjet, who was viewed as a benefactor and protector rather than a boogeyman or nightmare.

Followers of the Serpent Goddess. Uadjet, unlike many of her snake-deity peers, is known as an honorable defender. Her role is anything but passive, however, and she teaches that defense and protection are best served by being proactive. Followers of Uadjet, then, absolutely believe in taking preventative action and having a clear plan of how to approach and tackle any potential confrontation.

As a follower of the Coiled Goddess, you are entrusted as a safeguard. You may specifically be tasked with protecting a precious treasure, a holy site, or most commonly, a person of importance. This person might not even know why they are important, and you might not know either, but it is your duty to keep them safe. You will likely fulfill this duty by determining who and what might be a threat to your charge and taking action to neutralize or eliminate those threats as quickly as possible.

Warlock of the Cobra. Those who enter into a pact with a protective snake god(dess) tend to be nurturing but resolute, supportive but practical. Though in many cultures serpents carry heavy stigma and negative connotations, in some, such as ancient Egypt, snakes are seen a symbol of strength and divine authority. In this vision, then, the serpent cultists might be known for their benevolence and bounty, associated with anything from luck to pregnancy to fair weather and plentiful harvest.

Your patron is a powerful serpent spirit, perhaps an elder beast or aspect of nature. Your strength is in protection—power you can use for yourself, but it is most beneficial when guarding another. Your patron encourages you to seek out potential threats and eliminate them quickly but to be judicious in your strength if provoked. You are more focused on divination and exploration than other warlocks, but you also have the tools to hold your own in a fight.

The Great Serpent lets you choose from an expanded list of spells when you learn a Warlock spell. The following spells are added to the warlock spell list for you.

Skin of the Serpent

Starting at 1st level, your patron bestows upon you the ability to throw up a protective barrier at a moment’s notice. As a reaction, you can cast shield, requiring no components. Once you use this feature, you can’t use it again until you finish a short or long rest.

Fang of the Serpent

At 6th level, you can retaliate immediately when an opponent attempts to harm you and fails. When you use your Skin of the Cobra feature, the creature that attacked you is momentarily surrounded by flickering images of attacking serpents. The creature must make a DC Dexterity saving throw. It takes 2d10 poison damage and 4d10 radiant damage on a failed save, or half as much damage on a successful one.

Tail of the Serpent

Beginning at 10th level, your patron teaches you to extend your protective barrier to assist your allies. You can use Skin of the Cobra to protect yourself or one creature you choose within 30 feet of you. You must be able to see the creature, but it does not need to be friendly to you.

In addition, you gain resistance to poison damage.

Coil of the Serpent

At 14th level, your patron allows you to take its own form. You can use your action to assume for the form of a giant constrictor snake or giant poisonous snake as though you were a druid using the Wild Shape feature, except that you are able to speak and cast spells while in snake form provided the spell you cast does not require material components. You can stay in a snake form for a number of hours equal to half your warlock level (rounded down). You can revert to your normal form earlier by using a bonus action on your turn. You automatically revert if you fall unconscious, drop to 0 hit points, or die.

You can use this feature once. You regain expended uses when you finish a short or long rest.

5 thoughts on “The Sorcery Stop: Upholders of Uadjet”