Skip to content
Home / Delve into the Depths in the Kobold Blog / Welcome to Midgard: Trollheim 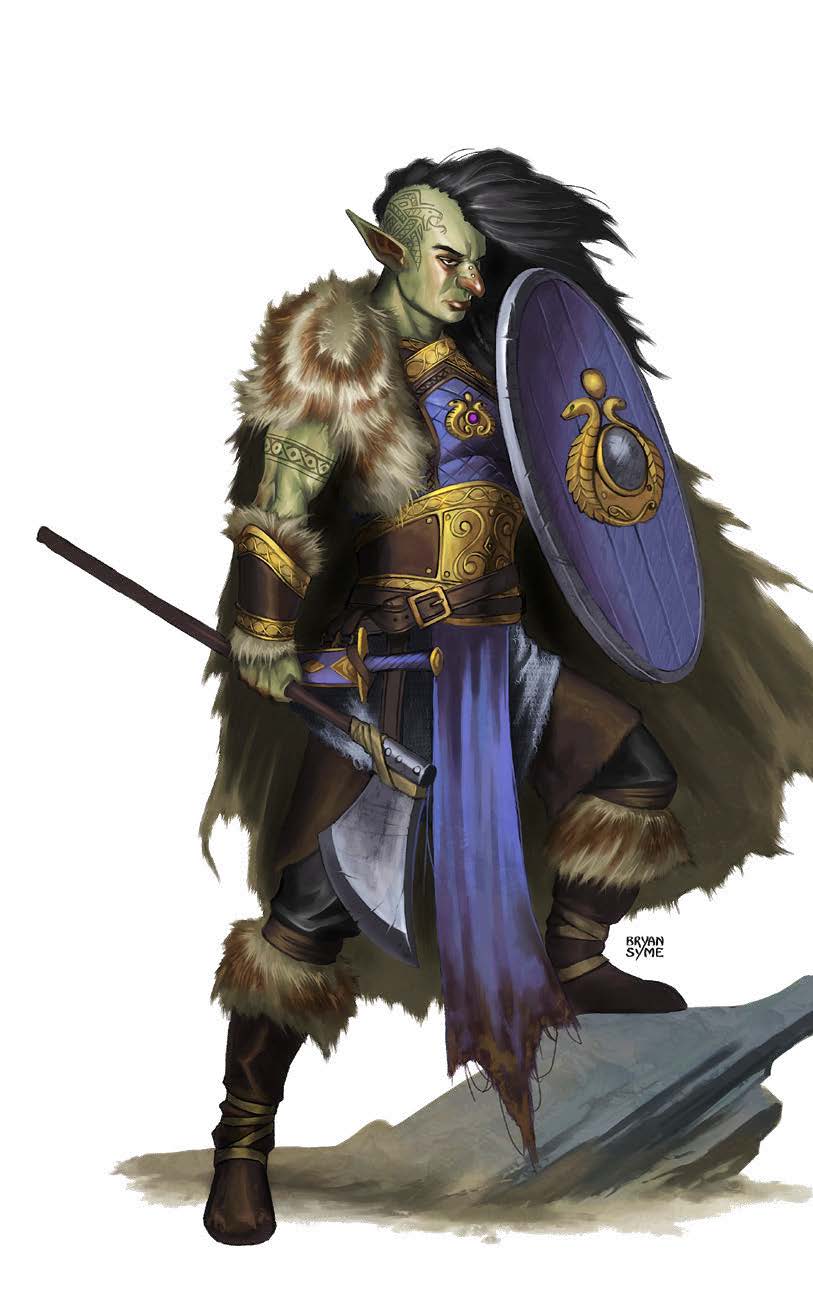 South of the Reaching Mountains and east of cyclopean Jotunheim, a fertile forest teeming with vibrant flora and fauna is sheltered from the worst excesses of cold and wind. Trollheim’s inhabitants are cunning hunters, fearless explorers, and fearsome raiders. Whether human, dwarf, or troll, few embrace the culture of the North as fiercely. They farm, brawl, raid each other, toast the gods, and consider themselves the best of all peoples. Most of Trollheim’s humans live in sheltered fjords, while dwarves claim mountain peaks and trolls, fey, and other races nest in the forest’s depths. Most inhabitants of Trollheim live in independent farmsteads and villages that come together in regional Tings when danger threatens, but otherwise have little patience for talk of kings and kingdoms.

Whether through some inherent fecundity, favorable conditions, or the will of Freyr and Freya, the trollkin—creatures once considered mere freaks of nature— appear to breed true and in unheralded numbers. Indeed, scholars have difficulty framing a cause that doesn’t involve the direct hand of a divine will behind the population explosion. Regardless, as the trollkin expand their reach, they encroach on the territory of the most isolated reaver dwarven clans, steadily pushing them into Trollheim. This development suits the dwarves to some degree; the land is fertile, after all. However, the jarls who claim the land the dwarves now occupy find themselves in a tough spot. The dwarves are a relentless and implacable enemy when crossed, and yet notoriously unreceptive to diplomatic overtures.

Should the trollkin drive refugees from Wolfheim into Trollheim, the delicate balance of power between the various jarls in the region could weaken them all, allowing the dwarves to run them out entirely. Many look to aged Uffi Toothless to take charge or surrender to a younger, stronger jarl. Uffi, finally facing a serious threat to his reign, contemplates a shocking and controversial maneuver—elevating a trollkin jarl. This means granting legitimacy to a clan of trollkin, but it might create a useful and numerous ally against the potential threat of dwarves the trollkin push into the region, whom Uffi fears from long experience. How this might shift of heated debate in the longhouses.

Trade in the region suffers, and even the trolls who hawk their wares throughout Trollheim do so with a growing sense of trepidation. Some human jarls protest, claiming that an obscure poetic work describes the existence of a trollkin jarl as a Ragnarok prophecy. This has led many a human warrior to challenge trollkin they encounter to combat.

Seven years have passed since Jarl Asvaldr of the Havardr clan led a combined fleet of his longships (see Midgard Tales) and those of many other clans south on a great raid only to vanish without a trace somewhere in the Nieder Straits, leaving the human population of western Trollheim almost leaderless. The chaos left behind in the wake of so many vanished jarls and warriors has ended many feuds and created room for more trollkin and even scattered frost goblin (fraugashar) tribes. Advice from wizened greybeards can only do so much for those too young and foolhardy to listen, and the unwritten laws of honor and custom were flouted with enough frequency that generations-old alliances have fallen apart. Powerhungry heirs still seek lands and foes to prove themselves against, and those with slimmer chances of inheritance look to take cultivated lands.

A World Tree called Wotan’s Tree stands in Trollheim near the mouth of the Tearstain River, downriver from the Fallen Kingdoms. The ravenfolk roost there often, on their way to various jarls or to consult with their seers and doomspeakers. It is one of the safest World Trees, since its ravenfolk make sure that only those ready to fly beyond the mortal world enter its weaving branches and dappled light of many planes. Legends claim that Wotan learned the runes here and the ravenfolk maintain a shrine in his honor, though few humans visit this sacred grove.

If Trollheim has a capital it is Noatun, a great human city of the North. It was founded by the god Njord when he was a mortal sorcerer of epic power and a sea captain of unmatchable skill. Back then the people revered the wild sea god, Aegir. When Mara bedded him and their lust begat the disastrous flood that created the Swive, the people called on Njord (Seggotan) to save them from the rising waters. Njord’s magic held back the sea for nine times nine days, while dwarves and humans labored together to build the great sea wall that still protects their harbor from wave and storm. For this they earned Aegir’s undying enmity, but the city was saved and prospered under a new patron.

Rare for a human settlement, Noatun is built more of stone than wood thanks to the skill of local dwarf clans. High thick walls guard against landward attack, while her trading docks and famous shipyards are surrounded by the enchanted sea wall, which magically calms both wave and weather. The wall is surmounted by nine towers whose masters are charged with the wall’s upkeep and defense. It’s a prestigious post; the rival Tower Lords are Noatun’s elite and form the core of the king’s court. The current king is Uffi Toothless, a warlord of unseemly age who is physically frail but as cunning as Loki and skilled in keeping one step ahead of power hungry jarls and rival kings. Noatun is rich and cosmopolitan, welcoming traders and visitors from far afield: longships laden with plunder and thirsty raiders, Khazzaki and centaur caravans, Ironcrag airships, and occasional flying islands of cloud giants or magicians of distant Sikkim. Even trolls with gold to spend are welcome (but watched closely).

Amberhall: A large coastal village with a lively trading post, Amberhall thrives under the direction of a capable jarl named Gunhilda the Lefthanded (female human ranger 13), though she swears fealty to Uffi Toothless in Noatun. Her ships and sailors, known for their wily evasiveness when dodging pirates, have sailed as far as Barsella, though lately they focus their efforts on New Wolfheim, a risky but profitable proposition for non-dwarven traders.

Jarrgard: Atop a low hill on the shore of Black Lake, the squat, snow-covered Jarrgard is an isolated dwarven fort protecting a lucrative silver mine. Hentgolf Trollbiter (N male dwarf barbarian 16), formerly of Wolfheim and a dwarf of fearsome reputation as a warrior, leads heavily laden longboats downriver when the ice thaws. The trip is a lively one. Salmon swarm upriver at this time, often chased by mated pairs of mahoru, who use Black Lake as a nursery before leading their young back downriver.

Jarrgard sees to its own needs and refuses trade with those settlements in no uncertain terms. Hengolf sent word to Noatun, informing Uffi Toothless that any approach made to his ships, the top half of the river, or Jarrgard will be considered an attack and dealt with mercilessly. Uffi made light of the message, pointing out the remoteness of Jarrgard and declaring in response that he would respect the dwarf ’s demands as long as Hengolf agreed not to set foot on the moon. Hengolf has not yet replied. Nevertheless, Jarrgard remains a remote and reputedly hostile destination.

Varnerhall: Perched on the steep cliff at the end of a heavily forested fjord, Vernerhall is a remote but prosperous village supporting high mountain farmholds. Clever use of the terrain and shrewd placement of defensive fortifications make Varnerhall surprisingly secure, considering the wild country which surrounds it.

Varnerhall makes a point of maintaining good relations with the nomadic people who pass through the region, trading for the furs, ivory, and reliable cold weather equipment and clothing. Jarl Yngvarr Ironsides (male human fighter 12) has granted the nomads and even a clan of goblins shelter within his fortifications and defended them when they have sought his aid in the past, and in return they provide valuable intelligence about anything from hostile creatures headed toward the hall to inclement weather on its way.

Adventures in Trollheim are split between intrigue and magic in Noatun and bloody adventures in the hinterlands.