Skip to content
Home / Delve into the Depths in the Kobold Blog / Friday Funny: Krenshar-Pei 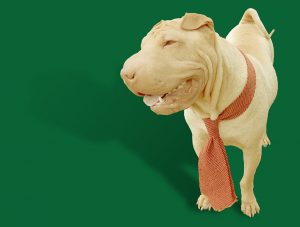 The shopkeeper looked at the leopard-spotted dog sitting outside his shop, and he found himself oddly compelled to leave his shop so he could pet the sad-looking animal. The dog sat there while he consoled it and asked it where its owner was. Suddenly, a sharp whistle sounded to his left, and the dog trotted off toward the sound. The shopkeeper watched the animal wistfully before returning to his shop, where he discovered his most expensive wares had been stolen.

ECOLOGY
Environment any
Organization solitary, pair, or pack (3-12)
Treasure none

SPECIAL ABILITIES
Malleable Skin (Ex) A krenshar-pei can adjust its skin to slip out of holds more easily, and it can also affect the emotions of other creatures. As a standard action, the creature can draw its skin away from its skull or increase the folds around its face. The first use allows a krenshar-pei to target a creature with cause fear, and the second use targets a creature with charm animal/charm person. Each effect has a save DC of 14, including a +2 racial modifier, and is Charisma-based. A creature that saves against either effect cannot be affected again by the krenshar-pei for 24 hours.

A krenshar-pei looks like a large dog with leopard spots on wrinkled skin. It is 3-4 ft. in length and 2 ft. tall, and it weighs about 75 lb. Atypical for a dog, the creature has retractable, and potentially lethal, claws. Its facial features change depending on its mood or its intent; a contented krenshar-pei has plenty of folds around its face, giving it a more defenseless and approachable appearance, while an angry or hurt creature pulls its skin back away from its skull, giving it a frightening appearance.

Krenshar-peis have been bred in a far-off land for centuries, but many of the creatures have escaped or been released into the wild, where they form packs and hunt prey animals. If they face competition for their hunting grounds, they ambush individual competitors until those creatures have died off or fled. Their favorite tactic is to leave a single krenshar-pei out to charm a target, and when the target is suitably distracted, the krenshar-pei’s packmates launch their attack.

Krenshar-peis are social creatures and prefer to have companionship—a small pack of the creatures might allow normal dogs to join, and they even accept humanoids as companions. Many rich, bored nobles import the creatures to act as pets or guard animals, and enterprising con artists employ the creature’s charm ability to distract their victims while they rob them.

A krenshar-pei counts as a 4th level creature for purposes of the Leadership feat.

[Based on an idea by the lovely Sera Johnson]