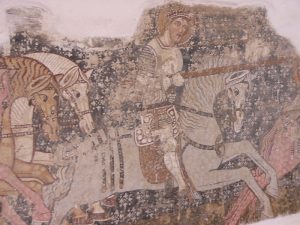 Traps. Devices devious and deadly. Understood to be a crypt’s most treacherous wards. Many so ghastly they become emblematic of a particular tomb’s history and character.

What the Dust Hides

In the spirit of preserving the tomb’s reputation as a place of unparalleled danger, this article series offers 10 macabre new traps for use in tomb adventures at any tier of play. Watch out!

Trap A frightening mural attacks living creatures that look upon it.

Perception
No check is needed to notice the mural.

Additional Skill (Religion)
DC 16—You recognize the nature of the mural.
DC 26—Your knowledge gives a +2 bonus to Diplomacy checks made to grant allies a saving throw against the trap’s effect.