Skip to content
Home / Delve into the Depths in the Kobold Blog / Monday Monster: Swamp Drake 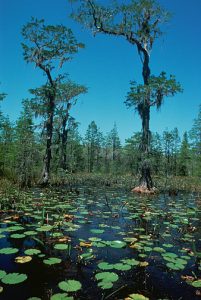 Steggar stayed behind while his fellow hunters returned to the village. Despite their warnings about the dangers in the swamp, Steggar knew he must return successfully from the hunt or face dishonor from the elders. As he thought about how he’d rather die than return empty-handed, he suddenly found himself knocked off his feet, face first into the shallow water, and then he felt a heavy weight drop on his back. He thrashed about to get himself out of the dank water, but the weight on his back adjusted and forced him to stay submerged. Moments later Steggar stopped resisting, and a minute after a creature resembling a flying crocodile tore into the dead body’s flesh.

SPECIAL ABILITIES
Needle Teeth (Ex) A swamp drake’s teeth inflict 1d4 bleed to a target it damages with its bite. However, the drake’s teeth cannot penetrate natural armor well, and creatures gain DR 2/— per point of natural armor against the bite attack.

A swamp drake resembles a crocodile with reptilian wings but is smaller than the more common reptile at only 8 ft. long, including a 1-ft.-long tail, and nearly 700 lb. Despite its appearance and 4-ft. wingspan, a swamp drake flies with some agility and manages to sneak around its native swamps with ease. Rows of needle-like teeth also differentiate the drake from a crocodile.

A swamp drake enjoys ambushing its prey and employing its favorite tactic of bowling a creature over into the swamp’s shallow water. After knocking an opponent prone, the swamp drake grapples with the creature to keep it submerged and drown it; the drake employs its paralytic spit on a creature, which resists too strongly. Because the drake’s teeth have difficulty penetrating natural armor, it avoids biting prey until it has succumbed to drowning. A pair of swamp drakes boldly attacks larger groups; one drake drowns a target while the other fends off any would be rescuers. When a drake takes 3/4 of its hp in damage, it will attempt to flee into the swamp.

This brute bullies its way around the swamp it inhabits, attacking easy prey and avoiding larger and more powerful inhabitants. However, the drake enjoys the challenge presented by the infrequent humanoid visitor, as it delights in drowning its victim and feeling his struggles weaken and eventually stop. Because of the creature’s method of killing intelligent prey, will-o’-wisps often form long-term partnerships with one. Lizardmen enter into short-term partnerships with swamp drakes in order to kill large groups of interlopers, but such pacts typically devolve into one side being forced to kill the other after they achieve their mutual goal.

A pair of drakes stays together as long as prey remains plentiful, and any eggs that result from mating are left untended in the swamp. Any young surviving the depredations of carnivorous denizens of the swamp (including other swamp drakes) seek out their own territory away from their parents and each other.