Skip to content
Home / Delve into the Depths in the Kobold Blog / Trapsmith: The Well of Souls 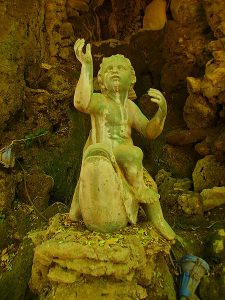 This is a well of souls, built by fell religions as a prison for their failures, heretics, or worse. A place where Good dies and is reduced to a form of currency. A well of souls is a place where many traps come together.

Four stairways lead down to a well of sorts. A greyish substance fills the well, its surface completely smooth. Four statues, each bearing faces twisted in horror, guard the stairways.

The Failed Four. Four failed acolytes stand petrified, their souls bound to their remains until they meet a quota of harvested souls. Eagerly, they await their next victims, ethereal whispers drifting from statue to statue. Each statue retains the ability to channel negative energy 7/day as a cleric.

As soon as a PC enters the area cordoned off by the statues the traps trigger, potentially catching the intruder with several bursts. On successive rounds, the statues act on initiative count 13. Attempts to disable the trap also trigger.

Defeating the failed four. Without their unholy symbols, the statues cannot channel negative energy. Removing an unholy symbol requires a Strength check (DC 15). Each statue has hardness 8 and 60 hp.

If the negative energy bursts unleashed by the four statues (or other effects) drops an intruder to -1 hp or less, the death’s pull trap triggers.

Failing the Will save, read aloud or paraphrase the following:

A misty form rises from the fallen, the well’s surface starts to churn and the misty form is drawn in. The temperature of the room drops noticeably, and your fallen friend rises again.

If the death’s pull trap is a success, each statue regains one use of their channel energy ability.

All creatures that die in the area cornered by the statues animate as zombies.

A Torrent of Souls. If the well of souls is exposed to 20 cumulative damage from positive energy, the seal that keeps the souls in the well breaks. Read aloud or paraphrase the following:

The smooth grey surface of the well turns to black, and a hundred ethereal voices roar to celebrate their freedom. Dozens of misty forms exit the well, flying toward their final rest.

Peering into the well, you see faint faces swirl in the grey substance.

Reasons for visiting the well of souls

9 thoughts on “Trapsmith: The Well of Souls”