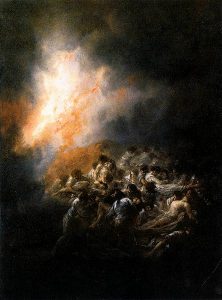 Smoldering Host of the Risen

“Can you call it a failure?” Her consort and servitor asked in return with a wry expression of pride.

“Yes Trelmarixian, I do.” The reply dripped with a curious mixture of ownership, disappointment, and grudging respect.

The Lysogenic Prince nodded, the gelatinous slurry of his facial features parting into a wry, flowing grin. “As you wish Lady of Famine. We shall make another attempt, and as for this…?”

A dismissive glare of black, mirrored eyes framed her reply. “Dispose of it. We care not where or how. Then, begin again.”

The Parasite Queen watched her consort leave with her other servitors, their collective failure in tow, likely soon to hurl it into the Maelstrom, or the Abyss, or some hapless world upon the material plane. They would not destroy it though, they never did, and in the fading glow of their creation’s sickly green flame, it might only be a matter of time before that callous disregard returned to haunt them and many others…

The greatest and most successful experiments by Abbadon’s daemons tend to be classified as spectacular failures. Such experiments have produced monstrosities whose power exceeded the designs of their daemonic makers and whose will vastly outstripped their masters’ capability of ever controlling them. While the demons of the Abyss were among the last and certainly the greatest of their brilliant mistakes, one of their first nearly approached that level, and it was a solitary creature, known simply as the Risen.

Dwelling within the layer of the Abyss known as the Candleflame Chancre, her name derives from the mistaken belief that she originated as a demon lord who rebelled against its own chaotic nature. Abandoned in the Abyss without a true corporeal form, the Risen lives by bodily possessing other outsiders, hijacking their physical shells as her own, at least until the time as she abandons them for another or her corrosive presence destroys them like so many expended, burned out candles.

Uncertain of her own nature and origin and tormented by these existential doubts, like a passing storm front she leaves a swathe of ruin in her wake, littering the Candleflame Chancre with her own attempts at creation in baroque, unknowing, twisted mimicry of her daemonic makers. She also leaves behind a trail of mangled fiends, tortured and then destroyed in one of her depressive fits of self-loathing and frustration or possessed and then abandoned in favor of a new host—and those who suffer her presence, those that survive at the end, known as the Soldering Host of the Risen, are never again whole.

Initially retaining a full memory of their actions and the sensations given and received during their tenure as their infernal mistress’s host, once abandoned and cast aside, these memories slowly fade in potency. In the end, they become only tormented, half-remembered dreams where only the concepts remain, rather than the fine details. And while they never retain any insight into the thoughts of the being of spiritual flame once wound around their core, they are indeed left with something tangible. Each of the smoldering host retains a fragment of the corrupting, consuming touch of the Risen who abandoned them, but never truly left them, neither whole nor free. Collectively intoxicated by her lingering influence, they depend physically and spiritually upon her corrosive touch, even as it slowly kills them. Unlike active hosts, for whom the flame devours until nothing remains, they smolder, agonized as much by what is there within them as what is not and will never again be.

The vast majority of these hosts remain trapped within the Risen’s layer of the Abyss, wandering a land of frozen forests lit by eerie, burning candles, broken by ruined, salted fields, frozen oceans breached by the crumbling spires of inundated cities, and glaciers choked with the bones of millions of demons. Such spawn have little in common beyond a shared agony, and the strong often hunt down the weak, bent on destroying any potential rivals for the ecstatic euthanasia they misguidedly desire. And for those who manage to escape, many of them later attempt to return, like masochistic addicts or moths drawn to a flame, called back by lucid nightmares of their original rebirth in the Cathedral of Splayed Demons deep at the layer’s heart where their mistress lairs. Those encountered beyond the Candleflame Chancre typically reflect the same paranoid, self-centered whimsy of their maker, often slipping in and out of periods of suicidal melancholy and frenetic creation or destruction.

Template: Smoldering Host of the Risen

“Smoldering Host of the Risen” is an acquired template that can be added to any evil outsider (referred to hereafter as the base creature).

A smoldering host of the Risen uses all the base creature’s statistics and special abilities except as noted here.

Size and Type: Same as the base creature

Hit Dice: Same as the base creature

Speed: Same as the base creature

Attack: Same as the base creature

Damage: Same as the base creature, plus 1d6 fire damage for any natural attack.

Special Attacks: A smoldering host of the Risen retains all the special attacks of the base creature and gains those described below. Saves have a DC of 10 + 1/2 the smoldering host’s Cha modifier unless noted otherwise.

Embrace of the Burning Queen (Su)—As a standard action, a smoldering host may call forth the burning corruption of its maker, directing it against one opponent (15d6 fire damage, no save) or to all within a radius of 10 ft. times their Charisma bonus (5d6 fire damage).

Special Qualities: A smoldering host of the Risen retains all the special qualities of the base creature and gains those described below.

Tethered to the Flame (Ex)—A smoldering host of the Risen is incapable of natural healing except within Candleflame Chancre in the Abyss. Magical healing deals only 1/2 the normal amount.

Skills: Smoldering hosts of the Risen have a +5 bonus to Intimidate, and a +10 racial bonus on Knowledge (planes) when relating to the Candleflame Chancre. Otherwise same as the base creature.

Feats: Same as the base creature

Environment: Any, usually same as base creature

Challenge Rating: Same as the base creature +3

Treasure: Same as base creature

Advancement: Same as the base creature

Smoldering hosts of the Risen that previously had cleric levels no longer gain their divine powers from their original patron, instead forever after gaining them directly from the Risen. They lose any previously held domains, replacing them instead from the following: Evil, Fire, Death, or Destruction.

3 thoughts on “Wayward Children of the Abyss (Part 3)”