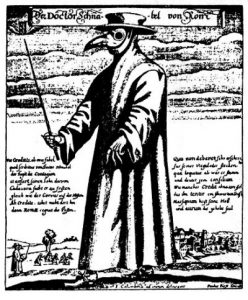 Pallid heralds spread fear and chaos, terrorizing areas as small as strategically important villages or as large as entire countries. Intelligent and cunning, these monsters immerse themselves fully in their missions, never allowing themselves to be distracted from their goals. Varying in methods, some pallid heralds prefer acting as figurehead for an assaulting wave of plague and some act secretly and invisibly to spread disease behind the scenes. Pallid heralds have no ego or insecurities to play on and are extremely hard to confuse or deceive. Their only emotional weakness is the twisted enjoyment they take in the suffering their plagues have wrought, which may cause them to linger longer than necessary in a region—enjoying their work…

This gaunt, looming figure regards the world from behind a featureless porcelain mask, its tattered red robes fluttering in an undetectable breeze.

TACTICS
Before Combat A pallid herald casts silence on itself and then attempts to attack with the advantage of surprise. If there is little available cover, it also casts invisibility in order to maximize its chances of taking its opponents unaware.

During Combat A pallid herald attacks the most physically frail member of a party first. As soon as it has more than one opponent within 30 ft., it activates its plague bringer’s curse ability. It generally spreads out its attacks to maximize the chances of infection. If hard-pressed in melee, the herald flies 10 ft. up and spends several rounds using its plague bringer’s curse from its new vantage point.

Morale A pallid herald has no interest in fighting a prolonged battle, especially if the force it is engaging seems to have come prepared. A pallid herald fights until reduced to half hp or until it has infected at least 2/3 its opponents. It then flees, using its spell-like abilities to evade pursuit. If it has infected all of its opponents and they seem to be struggling to fight off the disease, it lingers until reduced to 1/4 hp, distracted by its enjoyment of their suffering. If it ever believes it is battling a paladin, the pallid herald flees immediately.

SPECIAL ABILITIES
Aura of Affliction (Su) Creatures suffering from any diseases who start their turn within 30 ft. of a pallid herald have the statistics of said disease(s) change as follows: Save If normally lower, save DC increases to that of grey pox (see below), otherwise unchanged; Onset immediate; Frequency 1/round. This effect ends 1 minute after the creature exits the aura of affliction.

Plague Bringer’s Curse (Su) As a full-round action, a pallid herald can call disease down upon all living beings within 30 ft. All creatures in the area must make a Fortitude save (against the DC of grey pox, above) or contract grey pox.

One of the most terrifying servitors of the gods of pestilence and decay, a pallid herald is a clear sign that dark powers are at work in a region. Pallid heralds appear as tall humanoid figures clad in long tattered robes the color of dried blood. They wear a smooth porcelain facemask with holes for eyes, but no facial features. No details of their bodies can be made out beneath the concealing robes, though when they attack, they reveal horribly twisted and plague-rotted hands. A standard pallid herald stands over 6 ft. tall and weighs only 70 lb. When killed, a herald’s mask shatters, and the robes fall to the ground. Investigating the contents of the robes reveals a wizened humanoid husk, horribly riddled with a thousand diseases. Its age, gender and race are utterly indistinguishable.

Also known as the shambling plague, the fearsome grey pox is one of the most deadly diseases in existence yet also one of the most obscure. The vast majority of people have never even heard of this rare disease, for it has no source in nature. Grey pox is carried and spread solely by the actions of pallid heralds, a sign of their favored status in the eyes of the gods of decay. Its signs are obvious but dangerously deceptive.

Sufferers find their skin taking on a grayish pallor and their eyes taking on a milky sheen. Their gait becomes awkward and shuffling as their muscles begin to seize, and their tongues swell, making it impossible to form words and reducing their speech to guttural moans. Considering the source of the disease, it is no coincidence that these signs of infection cause the infected to become nearly indistinguishable from the common zombie. Indeed, whole towns of innocent victims of the pox have been slaughtered by zealous do-gooders, convinced that the townsfolk had been slain and re-animated as undead. It takes a DC 20 Perception check to recognize someone infected with the grey pox as a living being rather than a zombie. This check only applies if the examination is cursory, or at some distance, or the examiner is distracted, such as in the heat of battle. Close study of the infected immediately reveals the truth.

The PCs are summoned to an audience with the count of the local area, who has lost contact with several of the smaller villages on the edge of his lands and fears that some evil may have befallen them. His other attempts to investigate having failed, he wants the PCs to go and shed some light on what has befallen his people. What the PCs discover are towns filled with the walking dead, twisted cultists of death and decay, and perhaps a few villagers who cling to life amidst the desolation. Worse still, they discover that these horrific occurrences are just the start of a much darker plan and that the darkness which has come upon the land now seeks to strike at its very heart. Should it succeed, it will release the final breaths of a plague-wracked god, and all that lives shall perish in the Final Lamentation.