Skip to content
Home / Delve into the Depths in the Kobold Blog / Dragons, Dragonkin, and . . . Ostriches? 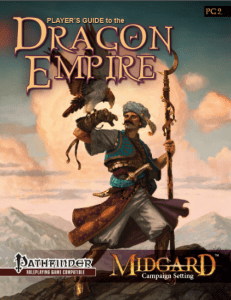 The PDF of the Player’s Guide to the Dragon Empire is out and on the Kobold Press store webpage, and it is chock full of draconic goodness for gamemasters and players alike. Dragons in fantasy RPGs have always been problematical: Are they mythic and invulnerable beasts as in the Tolkien tradition, or are they 1st Edition stat blocks that you can overcome with handy spells and convenient magic swords? The Player’s Guide to the Dragon Empire gives players and gamemasters the tools they need to find a fun and playable solution that falls wherever they want between these two answers.

With all the unique traits, feats, spells, archetypes, prestige classes, and items both “mundane” and magic found in these pages, it is easy to start a great campaign with draconic themes that can begin as low as 1st level, but that can also move into epic story arcs that run up to 20th level and beyond. This supplement allows characters to interact with, serve, fight, confound, and even marry lesser and greater drakes, dragonkin, and dragons, as well as their manifold scaly and furry servants and guardian animals (did I mention the baboons?).

Using the historical and cultural touchstones provided in the text, the player characters can easily join in a battle of wits with jambuka smugglers and kobaldi guild masters at lower levels, which lead to parleys with sekban merchants and akinji chamberlains, and possibly battles with edjet warriors at higher levels. If the party survives long enough to reach double-digit levels, they may find much of their activity has been engineered and guided by timarli drake dukes and urmanli dragon barons of the Empire, centuries-old drakes and dragons that play the Great Game of conspiracy over long decades, with lesser creatures serving as their playing pieces. Each seeks to protect and secure their possession of great wealth and imperial power, and each one is looking to gain enough power to join the ranks of the morza, the great and legendary Great Dragons that rule the Empire.

But who truly rules the Empire? The morza have appointed a dragonblooded human to sit upon the Golden Throne of Harkesh as their sultana. She acts as a pivot, check, and counterpoint all at once for the selfish and narcissistic great dragon lords. The sultana oversees the agencies and ministries of the Empire, as well as raises and commands its armies—she holds the Empire together.

For the Mharoti Empire is a young and growing militaristic nation, and its many and various armies raised by the sultana serve it well. The PCs may laugh when they see their first brigade of ostrich-riding light imperial cavalry, but they will stop laughing and start reaching for their battle scrolls when they realize they are also being flanked by the cavalry’s Dragon Emir commander, roaring a magical command to encourage his troops and demoralize the enemy, all while riding a huge fire-breathing lava dragon . . . what’s not to like? Your epic destiny in the Dragon Empire awaits!