Skip to content
Home / Delve into the Depths in the Kobold Blog / Inside the Kobold Mines: Playing in the Woods 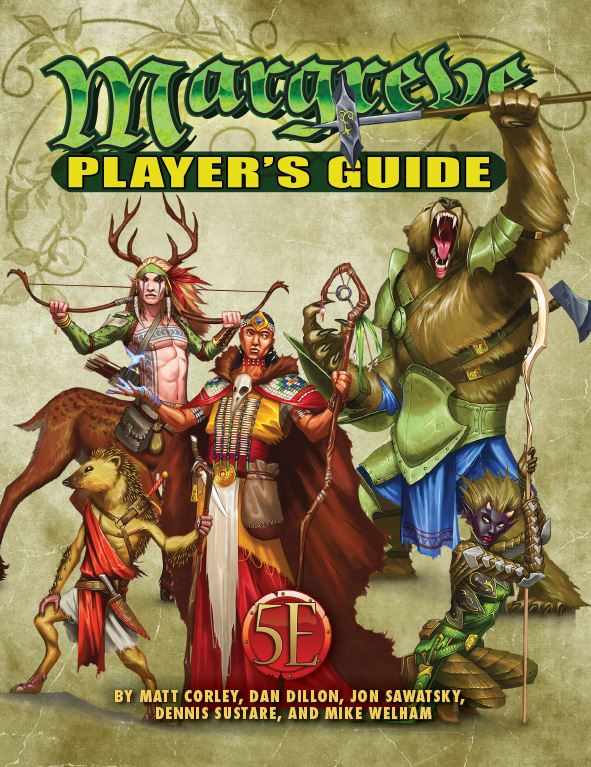 Let’s get one thing straight.

There is no way I can write a dispassionate overview of the overwhelming goodness that is the Margreve Player’s Guide. I just can’t. And there’s a very good reason for it.

And not only that, but I’m in it three times.

Now, while I’m no stranger to writing—I’ve written a children’s fantasy trilogy for Penguin Random House and a Star Wars novel for Disney Lucasfilm, and I’ve got another children’s fantasy out next year—the Margreve Player’s Guide marks my first appearance ever in anything related to roleplaying games, and this long-time D&D fan couldn’t be more thrilled.

So there you have it. You’re not going to get dispassion from me today. Nope.

But let’s get another thing straight.

The reason I’m in the guide—the real reason—is because when I see something that knocks my socks off, I cannot help but reach out and involve myself.

And Midgard, and especially Tales of the Old Margreve, was already knocking my socks off long before I became involved.

I chased down Matt Corley before I realized he was lead designer and was sort of unofficially playtesting the adventure the “The Honey Queen” for him before I was invited either to test officially or to contribute a short story to the Player’s Guide. And it was during that playtest that something remarkable happened.

One of my players did something so unexpected that everyone’s collective jaws dropped, and the others even said to me, “Did Jonathan just leave the game?”

And yeah, he pretty much did.

See, Jonathan’s character volunteered to change places with an NPC who was in thrall to a powerful creature of the forest. And he rolled a 20 on his Persuasion roll. And she accepted. So the party left with the NPC, and Jonathan’s PC stayed.

So I messaged Matt to tell him how surprisingly the adventure went and to discuss just where I could take it from there without writing that PC out, and together, we realized that the only way to keep him in the game was to change his character drastically. And for that, we’d need a new subclass.

And hence the warlock patron the Old Wood was born.

Sure, you get a brand-new subclass. But really it was just my selfish need for a way to keep Jonathan in the game without breaking everything in my campaign!

So that subclass, plus my short story, “How to Reign Your Griffon,” which opens the guide, and the Forest Dweller background (co-created with Matt like the warlock patron) are my three contributions to the book.

And that’s why I’m so excited.

Because the Margreve Player’s Guide is a lot bigger and a lot more exciting than just my three little pieces.

It opens with my short story, yes—and to my delight, stats for my character Sir Opinicus Stonecloud and his griffon mount, Swiftbeak—but then we leap into three new player races.

There’s the alseid (with gorgeous new artwork of a male member of that race), the erina (hedgehog people as near as I can tell), and (possibly my favorite new race in a while) the plant-like piney.

Then for clerics, we have the Hunt Domain, who serve gods of same, possibly even the Wild Hunt itself. And for druids, the Circle of Oaks, Circle of Owls, and Circle of Roses. Now, the Circle of Oaks was created by none other than Dennis Sustare. Yes, Dennis Sustare, the guy who created the original druid class back in the day! The other two (Owls and Roses) were designed by none other than Dan Dillon (Midgard Worldbook, Courts of the Shadow Fey)—he who recently joined Wizards of the Coast to work on Dungeons & Dragons in an official capacity. So you know they’re going to be good.

Next, we’ve got three new ranger subclasses—Gryphon Scout (trained by the elven courts), Grove Warden (who taps into the magic of the Margreve), and Spear of the Weald (alseid only). And for rogues, the Underfoot (erina only). In addition to the warlock patron mentioned above, there’s the Hunter in Darkness, and for wizards, the arcane tradition of Courser Mage (who focuses on stalking prey).

Next up is the aforementioned Forest Dweller background and six new feats—(I like Stunning Sniper)—and no less than 45 new spells. (Heart-seeking arrow is nasty!) Finally, we have seven new magic items and thirteen new monsters.

And that, folks, is why the Margreve Player’s Guide is not to be missed.

Now, on to something I’ve got no part in but that I’m absolutely wild about, and that’s the Tales of the Old Margreve Pawns.

You know, the first time I put pawns on the table, I felt apologetic that I wasn’t using miniatures, but I shouldn’t have. It was a pair of bone crabs from the Tome of Beasts, and my players went crazy for them. “I love the art!” was the biggest reaction, and everyone had to pass the pawn around. I’ve since used tons of Kobold pawns, including the River King and from this set the awesome shadow fey guardian.

There are over 80 pawns: not just the monsters but also the NPCs from the adventure and examples of the new races and classes. I’m especially excited by the bearfolk female since one of my players is courting the mama bear from “The Honey Queen.” Before this, I was using a homemade pawn of Momma Berenstain!

Flipping through the pawns, I’m particularly enamored by the treant, the pair of green hussars, the wraith bear, the two vine troll skeletons, the zyzhashcha (try pronouncing that), and the aforementioned male alseids (previously we only had art and pawns for their females). But all the NPCs are amazing too, and the examples of typical people like the Kariv youth, commoner children, or three different pineys are most welcome. And while the Iron Teeth of Baba Yaga may not be included, Inushka’s Pot is, and that’s the next best thing. Oh and look, there’s my Old Wood warlock too! So I guess I am in the pawns after all!

Lou Anders is the author of Frostborn, Nightborn, and Skyborn, the three books of the Thrones & Bones series of middle grade fantasy adventures, as well as the novel Star Wars: Pirate’s Price. You can find out more about him and his works at www.louanders.com, and visit him on Facebook and on Twitter @LouAnders.