Skip to content
Home / Delve into the Depths in the Kobold Blog / Kobold FAQ: Ley Magic 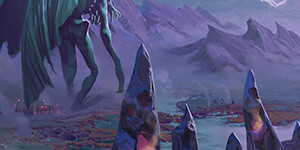 Considering making a new geomancer or picking up one of the ley magic feats? You might have many questions about ley lines and how they work. I know I did, so I went to the source and asked Dan Dillon, author of the book Deep Magic 5: Ley Lines from Kobold Press. Here is a summary of that conversation, FAQ style. All the answers come from Dan (except for the first two questions, which I added to provide a more complete FAQ).

Q: What are ley lines, and where can I read about them? Where are they located?

Q: Where can I read the rules about ley magic and how ley lines work in game?

Q: Are binding to a ley line and locking it the same thing?

A: No, binding to a ley line allows you to tap its power at any distance, not just within its area of influence. Locking a ley line sets its effect to one you choose rather than rolling for it.

Q: Only geomancers can lock a ley line and not non-geomancers using the Ley Initiates feat, correct?

Q: Since locking is only part of the Ley Line Mastery trait, does that mean geomancers always roll for effect until level 14?

A: Yes, unless the line is otherwise locked. You can only lock/unlock a line yourself at 14th level.

Q: How could a ley line be otherwise locked?

A: Rarely, some ley lines can be “naturally” locked, or magic items can do it. Things leftover from the fallen magocracies.

Q: Have you toyed with the idea of allowing locking an effect to a weak line before 14th level? As is, it doesn’t make for predictable game play and it borders on wild magic.

A: I haven’t tinkered with lower-level locking because it’s an incredibly potent ability. Imagine being able to make all your spells require no verbal components and then fighting a lich inside a silence spell.

Q: If a ley line was locked by another geomancer, does the Ley Line Savant 2nd-level trait used to sense ley lines also identify if the line is locked or what the effect would be as well? How would we find out otherwise?

A: As written, Ley Line Savant lets you find them. I could see allowing more information through study: Intelligence (Arcana) checks to examine a line to determine its properties.

Q: When tapping a bound ley line, does a geomancer need to make an ability check or is that only when tapping a nearby ley line?

A:  As written, you always need to make an ability check. But I’ve also found that the current DC 10 + spell level is a bit high and results in a more likely backlash than I care for. I’m experimenting with reducing the channel DC to 8 + spell level in my livestream game.

Q: If a geomancer fails the ability check, does this waste one of their limited daily “attempts” for tapping a bound ley line?

A: Yep. Another reason for the lowered DC.

Q: When a master geomancer locks a ley line, do they choose the predictable effect from the table, or do they roll for the effect? And is it always the same effect moving forward for this locked line?

A: When you lock a line, you choose the ongoing effect.

Q: When tapping an unlocked line, if the effect doesn’t apply to the spell, do we ignore and cast as normal, or do we reroll until something applies?

A: You’ve hit one of the hiccups in the system. I recommend allowing an option. If you don’t like the effect or it has no effect (e.g. fire damage boost when casting a non-damaging spell), then I let the caster gain temporary hit points equal to 1d6 per line strength (1d6 weak, 2d6 strong, 3d6 titanic) + their spellcasting ability modifier.

Q: When tapping an unlocked line, can we tweak our spell effect based on the result? For example, if the spell range is extended, there is no real benefit since we normally would have cast this spell while in normal range. Can we change our target to a farther one to take advantage of the new range?

A: Yes, it’s part of casting the spell, which is also when you choose targets and pick all the other spell parameters.

A: Not explicitly, but that’s reasonable.

Q: Using the Ley Initiate feat, a character can regain spell slots from resting near a ley line, yet an actual geomancer cannot. Why is that?

A: Wizards already get the ability to regain spell slots anywhere with Arcane Recovery. The Ley Initiate feat is a nod to that concept with the restriction that it only works near a ley line. And nothing stops a geomancer from taking the feat to gain that benefit.