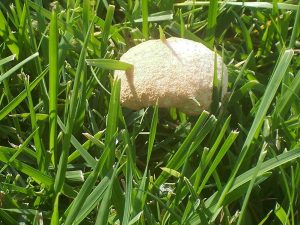 Colored in various shades of gray, mauve, and olive, this fungal nightmare resembles a towering gargoyle or demon with many horn-like growths sprouting from its body to form vicious teeth and claws.

Mold devils are sinister and twisted plant creatures that inhabit dense forests, waterlogged swamps, and large underground mushroom patches. While its normal form is that of a large patch of thick gray, purple, or green mold, the mold devil can assume the form of a large humanoid with spikes, fangs, claws, and other fiendish-looking features…

SPECIAL ABILITIES
Fiendish Mimicry (Su) A mold devil can magically disguise itself as a fiend such as a horned devil or nabasu as a swift action, cloaking itself in an illusion that functions as the disguise self spell (CL 12th). So long as no creature sees through the mold devil’s disguise (it gains a +13 bonus on its Disguise checks when using this ability), it gains a +2 morale bonus on attack rolls, damage rolls, and saving throws.

As soon as a creature sees through the disguise, the illusion shatters, and the mold devil cannot use the ability against the same creature for 24 hours.

Mold Form (Ex) A mold devil can assume the form of a pile of inert mold as a move action. While in mold form, the mold devil is immune to weapon damage, but it cannot take any actions, and it suffers an extra 50% damage from area-effect attacks and spells. Creatures viewing a mold devil in mold form must make a Knowledge (nature) or Perception check (DC 30) to realize that it is anything other than an unusually large patch of fungi. A mold devil can resume its humanoid form as a full-round action that draws attacks of opportunity.

Originally created from ordinary patches of mold subjected to infernal energy during botched summoning rituals, mold devils have since spread in number, feasting on the blood and bones of any creatures to fall into their clutches. Perfect ambush predators, mold devils use their fiendish mimicry power to confuse and frighten powerful or well-armored prey, often fleeing or assuming mold form if their ruse is discovered.

Mold devils hate most other forms of life but are drawn to fiends, often mimicking their behavior and habits. Fiends are generally disgusted by mold devils, but certain arch-devils or demon lords find them useful as servitors and guardians.

Mold devils have no digestive track to speak of, and must assume mold form to gain nourishment from the corpses of creatures they have killed, slowly liquefying the remains with powerful fungal enzymes. Thus it is possible to come across a mold devil in the process of dissolving a past victim.

The typical mold devil is 9 ft. tall and weighs over 600 lb., though larger specimens with greater illusory powers have been spotted in ancient jungles and vast underground mushroom forests.