Skip to content
Home / Delve into the Depths in the Kobold Blog / Beyond Damage Dice: Southlands Weapons 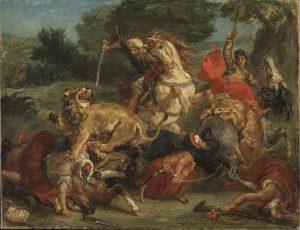 First crafted by the bronzesmiths of the Lion Kingdom of Omphaya, the wicked dikama fang blade is shaped like a serrated, oversized lion’s tooth.

Bloody Wound. When you hit a living creature with a dikama, you can choose to make a superficial but bloody wound. The attack deals no damage, but the target takes 1d6 slashing damage at the beginning of each of its turns until it or another creature makes a DC 10 Wisdom (Medicine) check as an action to stop the bleeding or until it receives magical healing.

Serrated Twist. When you deal damage to a living creature with a dikama (not including damage from the Bloody Wound maneuver), you may twist the serrated blade as a bonus action. The creature must make a Constitution saving throw or take 2d4 slashing damage.

A Nurian hook is a one-foot square shaft that ends in a bronze hook with an arrow‑shaped point at the pommel. Embalmers and butchers use it to hang up corpses.

Disarming Parry. When a creature attacks you with a weapon, you may use your reaction to catch their weapon in your hook and disarm them. Make an attack roll with your Nurian hook. If the result of this roll equals or exceeds their attack roll, their attack misses and they must succeed on a Strength saving throw or drop their weapon.

Trip. As an attack while you are wielding a Nurian hook, you may catch your opponent’s leg in an attempt to trip them. Make an attack roll against a Medium or smaller creature. If the attack hits, it must succeed on a Strength saving throw or fall prone.

Politics in the Mharoti Empire are a battlefield, and not all wars there are won with words. The scorpion stiletto appears as an ornate, ceremonial knife, but its beauty distracts from the deadly poison secreted within—the venom of the Mharoti emerald scorpion. Though this knife originated in the Dragon Empire, it is now wielded by assassins and cutthroat politicians throughout Midgard and the Southlands.

Concealed Blade. Instead of making a Dexterity (Stealth) check to hide yourself, you may make a Dexterity (Sleight of Hand) check—contested by an active or passive Wisdom (Perception) check—to conceal your stiletto. As an action, you may make a weapon attack with a concealed dagger against a creature that has not yet acted in combat. This attack has advantage.

Release Venom. A vial of venom can be loaded into the handle of this stiletto. As a bonus action, you can press the jewel on the dagger’s pommel to release the venom into a groove on the blade.

Any type of injury poison can be loaded into the stiletto’s hidden chamber, but the most common is emerald scorpion venom.

Emerald Scorpion Venom (Injury). A creature subjected to this poison must make a DC 16 Constitution saving throw at the beginning of each of its turns, taking 24 (7d6) poison damage on a failed saving throw, or half as much on a successful one. This poison lasts until the target succeeds on three saving throws or is magically cured.