Skip to content
Home / Delve into the Depths in the Kobold Blog / Welcome to Midgard: Lay of the Dark Kingdoms 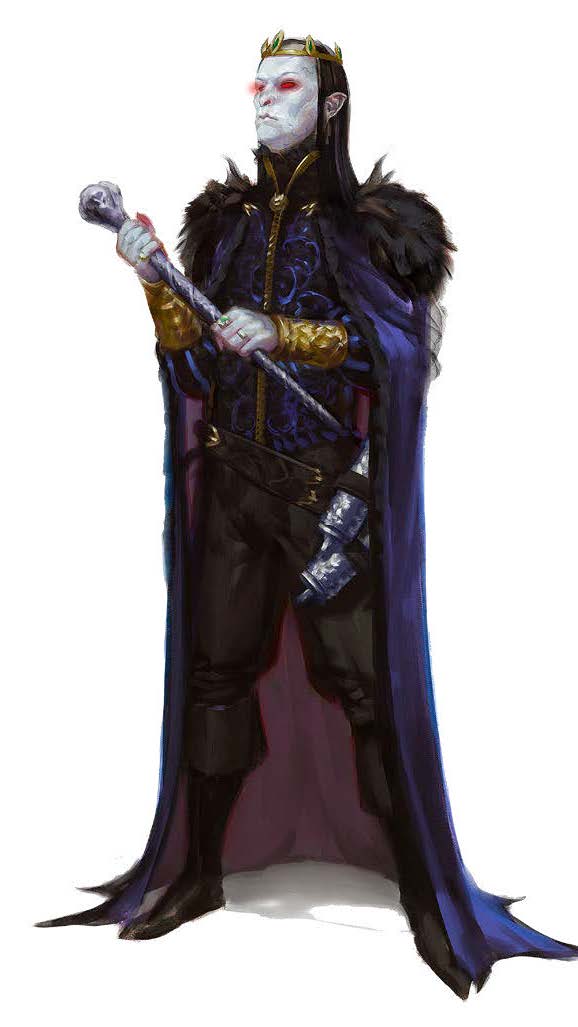 A hungry crow pecks at the eyes of the rotting corpse hanging on a rusty gibbet at the crossroads. The night air is filled with the howling of wolves, the soft hooting of owls, and the occasional human scream.

The Blood Kingdom of Morgau is made up of three former kingdoms: the Duchy of Morgau, the Barony of Doresh, and the newly conquered northern province of Krakovar.

Morgau and Doresh are located on a forested highland known as the Brom Plateau which lies between the Ironcrags to the west and the Cloudwall Mountains to the east. To the south stands the dense and ancient Margreve Forest; the vast Rothenian Plain extends as far as the eye can see to the east beyond the Cloudwalls. The fast-flowing and icy River Runnel divides Doresh on the western side of the plateau from Morgau to the east, before heading north and east into Krakovar and meeting the sea at Lodezig. Too narrow for boat traffic, the river teems with trout and perch. The lands of the Principalities are richly fertile—although the fields are small, they yield abundant crops, the vineyards produce excellent red wines, and the woods are full of deer and boar, providing plentiful hunting. Throughout both Morgau and Doresh, the misty landscape is dotted with small villages, crumbling ruins, and the keeps and manors of the vampiric nobility.

Bordered to the west by the Tomierran Forest, the province of Krakovar is less mountainous than Morgau and Doresh, but its central and southern parts are still hilly and rugged. The wide Yoshtula River flows through the middle of the kingdom, connecting two of its major cities—Gybick and Varshava—and meanders across the plains, before emptying into the Nieder Straits near the capital city of Krakova. The northern coast can be wild and the weather stormy, but Krakova is still the most important trading hub on the Straits, even after falling under vampire rule.

Situated in the shadow of the towering Heartspire on the main road to the east, close to the junction with the Great Northern Road, Bratislor is the capital of both the Duchy of Morgau and the whole Blood Kingdom. Surrounded by the most fertile fields and pastures in central Morgau, the city’s coat of arms depicts a black castle atop a gold crown on a purple field, with a silver crescent moon above its battlements.

Bratislor is a grim city of gray walls, dominated by the imposing edifice of Bratis Castle perched atop a crag in the center of the city. Home to King Lucan, the castle is entirely the domain of the undead; no living knights or servants are permitted within. Skeletons serve the keep and a company of darakhul and imperial ghouls guards its walls. The king holds court at the castle at the Summer and Winter Solstices and all the Elders and their spawn are expected to present themselves. On some occasions Koschei the Deathless attends, always with a different young woman on his arm. Their looks of shocked terror amuse King Lucan no end.

These festivals are a time of fear for the mortals of Bratislor; each solstice 100 living citizens are invited to attend the King’s Feast. Afterward, only one “lucky” individual returns to the city’s cobbled streets, his or her eyes and tongue gouged out and mind shattered by having heard the words of the Elders and their plans for the realm for the coming season.

The Duke of Morgau—Thurso Dragonson, Master of the Black Hills, Protector of the Fane of the Blood— governs one-third of the Blood Kingdom on behalf of King Lucan and lives in considerable luxury in the city’s Heartspire Palace. Nominally heir to the throne of the kingdom, Duke Thurso’s hold on power is precarious— he depends on both the support of his barons and the king’s favor. He lives in alternating fear and arrogance, depending on his degree of confidence at any given time. Five years ago, the scheming Countess Urzana Dolingen attempted to topple him in a coup, fleeing to the Ironcrags when it failed. Now back in favor with King Lucan after brokering the pact with the Ghoul Imperium, the Countess has her sights set on the Duchy again and has begun a whispering campaign against Dragonson.

Duke Thurso is not one to ignore these attempts to undermine his position, and he relies on the support of his sister, Princess Hristina, at court. She has taken on the mantle of Protector of Krakovar in addition to her role as Grand Marshall of the Ghost Knights, and her star is very much in the ascendant. Some believe she wishes to claim the mantle of heir for herself, but none whisper this anywhere near Duke Thurso.

Many famed poets live in the city, and bards often visit during the Poet’s Festival in the spring held at the duke’s behest. Thurso is an enthusiastic patron of the arts and has been known to shower talented artists and performers with gold and silver. A select few who particularly impressed him have even been rewarded with the gift of eternal life and subsequent entry into the vampiric ruling class. However, a grisly fate awaits those who displease the duke with crude doggerel or biting satire: impaled on stakes at Poet’s Corner, their screams often last until sunrise.

Hengksburg is the most stable and secure city in the Greater Duchy. It thrives on the vile trade in flesh and blood, buying captives seized in raids and selling them at its Meat Market to the dukes, barons, and other nobles who desire them. A safe distance from the conquered territories to the north and the borders with Morgau’s enemies, the main trade center of the realm is always bustling and free of major disruptions. Trade must flow, tolls must be paid, and most of that profit winds up here.

Unsurprisingly, the cult of Mammon has a visible presence here, though without a temple to call its own. While the archdevil’s priests are free to walk the streets openly as long as they make their obeisance to the Lord Mayor, Hengksburg’s richest merchants, grown fat on the profits of the flesh trade, keep a low profile, disguising their wealth and eschewing ostentatious clothes for fear of the city’s remorseless tax collectors.

Hengksburg is ruled by Lord Mayor Rodyan, a corpulent shroud-eater who demands a toll in blood from every visiting merchant, from each serf on his land, and even from the lesser nobles who serve him. The Glutton’s appetite for gold and blood is exceeded only by his need for sexual release. To date, Rodyan has been married more than 300 times—some of his wives lacked the constitution to survive even a single night of Rodyan’s amorous advances—and the teenaged peasantry fear little more than to be selected.

For over a year, the common folk were spared Rodyan’s attention when the Mayor married Aliessa, a formidable woman who outlasted the previous hundred or so wives and was given the whispered nickname of Death’s Whore by the fearful serfs. Inevitably, Rodyan tired of her too, going through 20 wives in rapid succession after her downfall before deciding his next spouse should be one of Perun’s daughters. He eagerly awaits the delivery of his new “amazon bride.”

When he’s not indulging his foul appetites for blood and sex, the Lord Mayor likes to spend time nurturing the necrotic ticks he is breeding in the laboratory beneath his mansion. He uses them to create zombies to fight in the gladiatorial arena close to the city’s central Hangman’s Square. Unconfirmed rumors state that Rodyan’s many past wives still live in the mansion’s dungeon as vampiric thralls or drooling experimental subjects; others may haunt its corridors as ghosts or specters.

This military city is small but well organized. The Order of Grey Knights has a great commandery here, and the Temple of the Scourging Goddess is a center of the more warlike and flagellant priestesses of the Red Goddess. Vallanoria always retained close ties to Krakova to the north, and its citizens have never been as subdued and pliant as most of the living serfs of Morgau. However, the conquest of Krakova by the undead armies of the Principalities dealt a terrible blow to those who one day hoped to be liberated from their vampiric oppressors. Several past revolts were brutally quashed and as a result no one speaks of rebellion in Vallanoria these days, except among trusted friends. The baron has spies everywhere. Some think the crows all serve as his informants; others say the standing offer of 1,000 gp for the arrest of any rebel does his work for him.

The city’s ruler is Baron Urslav, the Crawling Lord of Vallanoria, the Keeper of the Red Sisters. Urslav once made the grave mistake of offending Grandmother Baba Yaga and she responded by removing all his bones with her magic. As a result he spent a few weeks crawling on the floor of his palace before the terrible curse wore off, and the nickname stuck. He hates the nickname and despises Baba Yaga, spending much of his time plotting his revenge. To that end, he has become a champion of the Red Goddess Marena, giving generous endowments to her abbeys and paying for the construction of new temples. Each year at her festivals he brings both animals and serfs to her altars as sacrifices.

The beautiful palace of Vallanow serves as the venue for the Elders to celebrate Ghost Night and the start of winter in the presence of King Lucan and other dignitaries. The invitations to this debauch are highly sought after, at least by the undead. The stench of slaughter and decay brought to the palace by its guests makes the living nauseous for days. The festivities are organized and led now by Xanthus the Flenser, a high priest of Chernobog whose fondness for blood sacrifices at dawn is well known.

The Ghost Night Ball is usually followed by a brutal round of executions, after the common folk attempt to rise against their masters. Each year, they would pray for a Krakovan army to arrive with the spring, but it never came. It certainly won’t now, though the most desperate still pin their hopes on a dwarven reaver army…