Skip to content
Home / Delve into the Depths in the Kobold Blog / Out of the Frying Pan: The Cellars of Phineas Scrybb

In a southwestern “backwater” of Zobeck’s Collegium District, near the banks of the Derry River, sits a crooked little side street on which stands a tilted little shop. The sign reads, “P. Scrybb; Herbalist, Taxidermist, Conservator Exotique.” PCs find themselves traveling the narrow lanes and backstreets of this rather “less-illuminated” neighborhood, searching out said Mr. P. Scrybb.

Have adventurers returned from distant expeditions with exotic hides and trophies or strange flora for evaluation, preservation, or sale? Perhaps they seek the herbalist and taxidermist for a patron intent on collecting commissioned items or enforcing a refund? In any case, PCs turn onto lonely Derryside Road near the unusual workshop of Phineas Scrybb.

Encounter 1: The Worms get the Early Bird 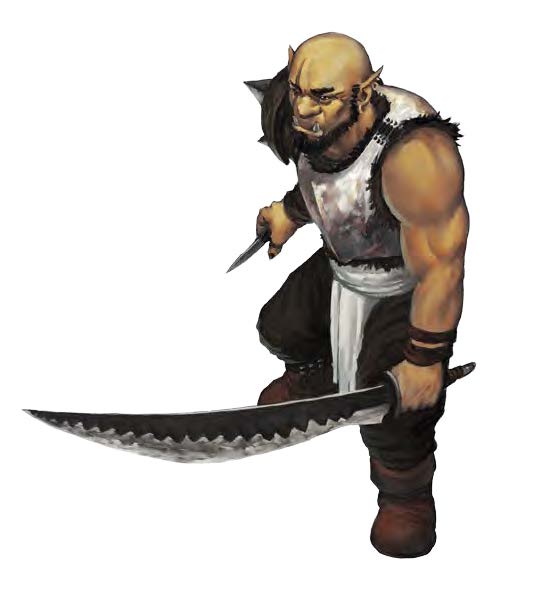 You turn onto the old, somewhat neglected riverfront avenue of East Derryside. The handful of businesses operating here comprise small-time tanners and renderers, “discount” fishmongers, and the occasional second-(and third)-rate alchemy shop. The neighborhood’s “stimulating” fragrances doubtless explain its many vacancies. Soon a knot of people comes into view 50 yards ahead, gathered actually just outside your destination. As you draw nearer, the group confers furtively.

Developments. If PCs close within 90 feet of the taxidermist’s door, two of the seven bravos lurking outside (use black knight commander [un-mounted] and bandit lord; see Tome of Beasts) move to intercept, intent on discouraging and diverting them.

Deciding you’re no run-of-the-mill pedestrians, two burly figures step away and walk purposefully toward you. The lead man hails:

“‘Apologies for inconveniences, good citizens. We’ve had an ‘incident’ hereabouts. Deputies o’ the watch is handlin’ things now, but this here street’s closed to civilian-types fer, oh… an hour say. Please, be s’kind as to return then.”

Appearances suggest that any experience these men have with law-enforcement lies strictly on the receiving end.

PCs making successful DC 16 Charisma (Persuasion) or DC 19 Charism (Deception) checks keep the point men confused or distracted for 1 round/success/PC. Pressing forward, regardless, invites a full assault. PCs successfully approaching within 15 feet of Scrybb’s before the second round ends can attempt peering through the storefront with a DC 14 Wisdom (Perception) check before the remaining hooligans attack. Success reveals two rough-looking tieflings inside, knives and cudgels drawn, that are threateningly prodding a bald, bespectacled little man through an interior doorway.

Players attempting teleport, dimension door, arcane eye, and the like will find the shop infused throughout with forbiddance and nondetection magic.

All six street thugs are under spell effects (5th level) of bless, protection from energy (cold), protection from evil (undead), and vagrant’s non-descript-cloak. Successful DC 16 Intelligence (Arcana) or Intelligence (History) checks identify ritual scarring on the knife cultist as symbolic to the Cloven Nine. Thugs fight until slain, preferring oblivion to the delicately lingering mercies rewarding failure to the Nine.

Encounter 2: I Swear It Just Moved!

PCs must enter via the front door or window, Scrybb’s has no fire exits or rooftop access, and the flanking buildings are boarded up and vacant. Scrybb’s long (70 × 40 ft.) interior showroom is high ceilinged (20 ft.) and aisled by tall shelves and wall-cases. Shelves contain wildly assorted taxidermic trophies from stuffed-and-displayed foxes, bobcats, and wolpertingers to mounted wendigo-antlers, worg hides, and sahuagin skulls. From the high rafters hang scores of shrunken-heads and stuffed game fowl, drakes, trophy fish, and an enormous cockatrice in flight. 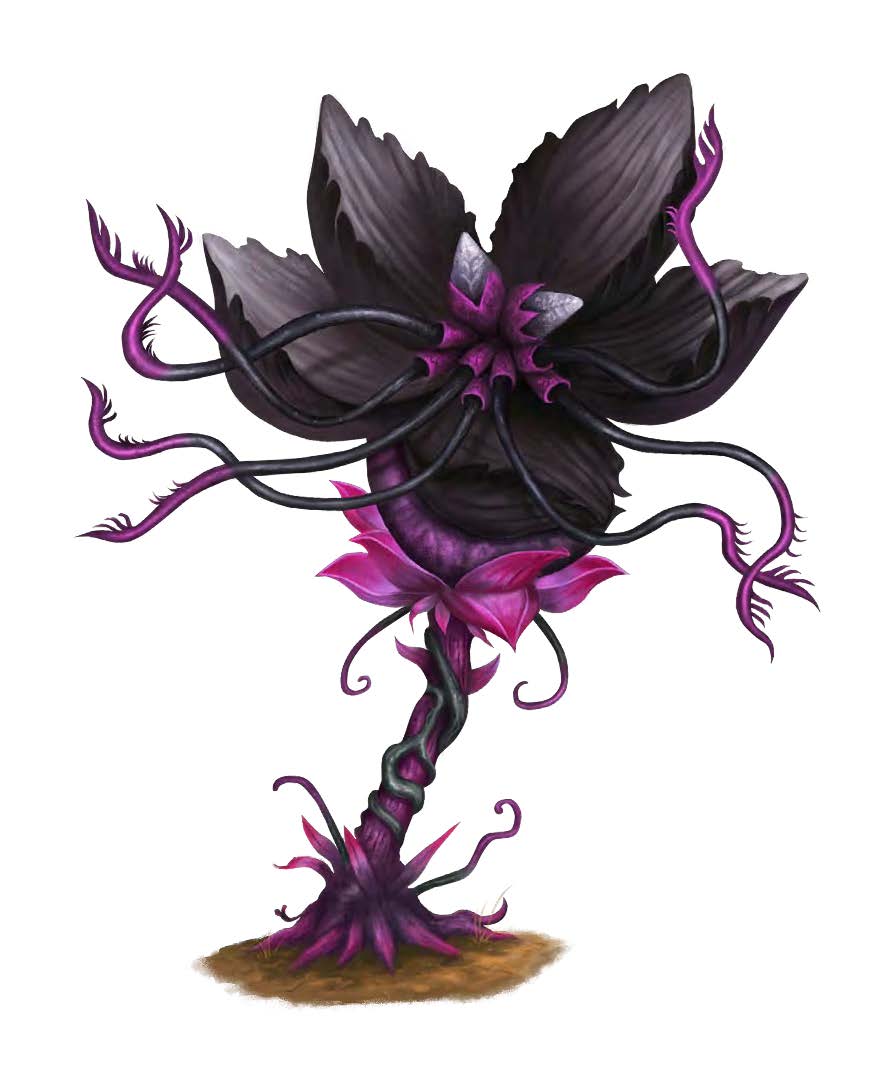 Floor areas are crowded with propagation trays of herbs and mushrooms, pots and planters of latticed jasmine, nightcreeper, and other low-light plants. Nearby stands the (now un-barred) root-cellar door.

Developments. PCs may investigate so long as nothing is physically touched or moved. Doing so during Phineas’s absence causes five great mandrakes to uproot themselves and scurry about the shop maniacally, biting and shrieking at random targets. Three gloomflowers also rise from concealment and four “stuffed” drakes (use unhatched) break free, taking flight to attack (for all, see Creature Codex).

Active plants and undead disengage, withdrawing as a bald, bespectacled little man, shuffles into view, still calling out from the open cellar door,

“My humblest-apologies, citizens. The watchdogs are set for aggressive vigilance during my absences. But welcome! I am Phineas Scrybb, my mother and I witnessed your quick thinking with our previous quests. We admire and appreciate action with discretion. That crew was sent here by those wretched tiefling gangsters, you know? Bullies sent to rob and intimidate, yes, but more specifically to pilfer Mother’s books. We know this much already. You see, we have them… ah, ‘detained’”—he smiles—”and Mother’s almost done… scolding them. Please join us if you are curious. I suspect our guests have much to interest you. Besides, Mother will want to thank you, and there’s Khandirian tea!”

He turns and descends into the gloom. 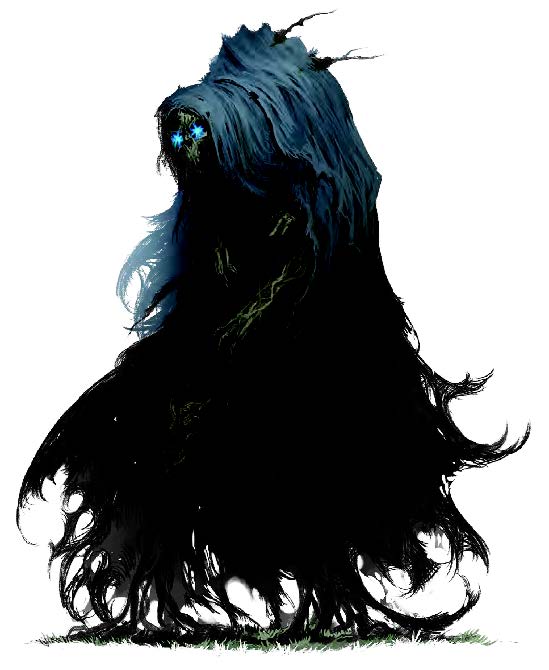 The 30-foot descent is surprisingly well-accommodated with thickly paneled walls and carpeted stairs. Luminous fungal globes growing in tall pots provide dim light. An ornately carved door stands ajar at the foot of the stair. PCs approaching within 15 feet detect a warm glow and muffled sounds of multiple voices, conversing beyond the door. Approaching within 10 feet causes all to fall silent.

A writhing mass of tangled roots and thrashing, thorny tendrils lurches out at you through the doorway. Beyond it, more figures mill about a finely dressed elderly woman lying peacefully, partially submerged in an immense bed of soil. Growing around, over, and FROM the woman is the root mass of an undead, tree-like horror.

Attacking from the doorway is warlock’s trumpetbloom behind which a devilbough and (tiefling) mold zombie advance. Wrapping around and into the “planted” woman are the feeder roots of an ancient mandriano, busy (GM’s discretion) transforming the second tiefling ruffian into another worm-ridden mold zombie. Phineas Scrybb, a necromancer (for all see Creature Codex), begins spellcasting and raving,

“Did you think us fools? We will NEVER vacate, not to you, nor the Spyglass Guild, nor even the Cloven Nine! You thought my little pets upstairs challenging? Hah, Mother grows best!”

Phineas and his “mother-mandriano-symbiote” defend each other to the bitter end.

And not a drop of Khandirian tea in sight.

1 thought on “Out of the Frying Pan: The Cellars of Phineas Scrybb”