Skip to content
Home / Delve into the Depths in the Kobold Blog / Your Whispering Homunculus: The Undiscovered Bestiary—Purple Worms, Part Two 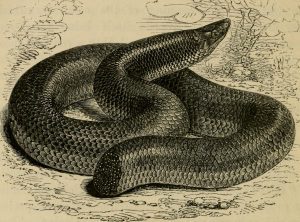 Continuing our look at rarely encountered purple worms, we come to the letter N…

“The tunnel stank abysmally. Its flanks oozed vile slime that slithered like thick spittle down the walls. Worse was waiting within those walls, however, for the slime played host to thousands of vile, white worms, a living wall of filth and horror.”

The mere largeness of this worm (it has the advanced template) would be bad enough, but its size is merely a biological quirk. The true reason this creature earns its title is in the infestation that lurks within its chitinous skin and what those parasites do. This creature infests its lairs with a foul slime that can, in mercifully rare cases, have the same qualities as green slime. The more commonly encountered slime houses an appalling parasite worm, generally no bigger than a human arm but capable of growing much larger. These parasites are classified as a hazard rather than as a monster in their own right.

Anyone coming with 10 ft. of the excreted slime of a nightmare purple worm may be subject to attack. Attacked creatures must make a Reflex save (DC 15) to avoid being infected by the worms, which dig into skin in a similar way to rot grubs. The wan worm immediately digs into the host’s skin and begins to devour it, causing 1d6 Constitution damage per round (at 0 Constitution the host dies along with the worm itself, which dies at the same moment it implants a wormlet into the creature; this wormlet feeds on the dead host and in time grows into a nightmare purple worm). As the worm burrows beneath its host’s skin, it can be attacked as an AC 20 creature with 10 hit points. Any damage inflicted on the creature also injures the host as do any missed attacks on the worms made in this way.

“The whole cavern below us was alive with a vast, crawling, spittle-soaked mass of purple worms, a seething ocean of the creatures.”

The much-feared pack worms are a curiously dangerous offshoot of the standard, usually solitary purple worm. Quite why this curiosity came about is subject to conjecture: some see the guiding tentacles of Jubilex or his foul followers, others say that they believe the creatures were the result of aboleth scientists tampering with the ways and forms of natural order. Regardless of why or who, the results are frightening. Pack worms are encountered in groups of at least half a dozen, they are more intelligent than standard purple worms (Int 2), and they hunt in a pack-like way. Usually, a pair of worms pursue prey into a region where others await in the walls nearby, using their tremorsense ability to remain hidden before their prey is driven into their eager mouths. Although no more than a bard’s tale, stories continue to circulate of a vast, cathedral-like space far from daylight where a whole horrific slew of these creatures writhe in an endless dance, feasting upon each other or anything that happens to gain their terrible attention.

“As the beast opened its vast, toothy maw, I saw its throat writhe with row upon row of dagger-like fangs.”

The horrid purple worm has an array of spines and teeth inside its body to make tearing and digesting its food far easier. This vast purple worm has the advanced creature template, but its swallow whole ability is far more dangerous.