Skip to content
Home / Delve into the Depths in the Kobold Blog / The Con Report: Indiecon (Part 1) 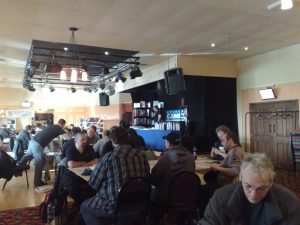 Indiecon is a small, indie-game oriented convention in Hoburne Naish in Southern England. It’s held in a caravan/chalet holiday site, right on the coast, but before you get visions of sun, sea, sand, and sorcery, it’s held off season at the end of autumn when things tend to turn stormy and wet. So much so that, this year, we decided to re-dub the convention “Windycon” in much the same way that UK GenCon used to be nicknamed “Cryogencon” due to the freezing temperatures…

This is Indiecon’s second year, and while the weather was blustery last year, this year there were flood warnings and gale force winds across England and Wales. We began to seriously consider who we might have to eat first if we were cut off from civilization completely and rendered unable to order in pizza or whether we’d end up holding the convention in The Emerald City.

Despite all this, the convention increased in size this year though doubtless some people were rendered unable to make it due to the abysmal weather. Indiecon retained its friendly atmosphere, perhaps even more so considering the severity of the conditions outside since—being British—the weather gives us common cause to complain and share experiences and gives strangers something to talk about, as does gaming.

Between six people, sharing a chalet and staying for the full span of the convention (Thursday night to Monday morning), it cost us around £50 each. There’s no food included, but the food on site isn’t too awful, and there’s an on-site mini supermarket as well as a Tesco superstore only a short distance away. To feed all of us, on groceries, it cost us around £10 each for main meals and a bit more for drinks and extra snacks, meals, and so on during the days.

If you drive, travel isn’t an issue. Trains can be a bit more expensive, but it’s not too far from the station in New Milton up to the site. Walkable without too much luggage and on a day when it’s not raining ropes and trying to blow you into the sea.

The chalets are very pleasant and remarkably warm, even at this season. The AV equipment was a little out of date in our chalet, but they are upgrading the chalets with flat screen TVs and access to digital television and Sky TV as a progressive rollout. There is wireless internet access—better than the local mobile phone signal—but you need to pay £25 for access over the weekend, something I deemed to be a little too steep.

There are heaters in every room, the beds are comfortable, and our chalet had a proper bathroom suite and a separate shower/toilet room. The communal area is the kitchen/diner/sitting room and there’s room to fit in some after hours gaming here though the kitchen table would be a little too crowded for it.

War for Edadh (www.warriorelite.com) is a very interesting card game, which was present at the last Indiecon, pretty much at their launch of the product. Edadh is a very engaging and genuinely alien fantasy world, a breath of fresh air given the current vogue for revisiting the fantasy staples of dwarves, elves, dragons and so on. The card game is non-collectable and currently runs to one main set and two expansions, setting the Empire forces—black powder weapons and heavy armor—against the Angueth rebels, tribesmen and nomads. The expansion packs, each around fifty cards, provide cavalry and extra tactical options for both sides.

If you want a game with tactical depth but don’t want to shell out the hundreds of pounds it takes to seriously get into a miniatures game these days, Edadh is a very good option. The guys are innovating and finding new uses for their cards and game rules, including working on a more skirmish/adventure oriented way to play that brings some role-playing elements into the card game, something they did some testing with at the convention.

New expansions will provide new races, factions, tactics, and terrain, starting with a snake-like race and their monkey allies who play a trading and native factional role and ally with either of the main sides in the conflict according to each tribe’s unique situation.

Edadh is currently, mainly, available in the UK but the company is breaking into Europe at present. America will come, but in the meantime, American distribution is via Warpath (www.warpathgames.com) or US purchasers can get hold of the game, directly, via the Warriorelite website.

Pants on Fire games (www.pantsonfire.co.uk) is a new start-up board game company with two games currently in production and a third on the way. The first game—from which they take their company name—is Liar Liar, a game of bluff, counterbluff, and risk. It’s sort of like a Trivial Pursuit for bullshitters. The aim of the game—to win—is to get to the center of the board with as many Liar cards as possible, these being earned for successfully lying to your fellow players. The advantage over a game like Trivial Pursuit is that you don’t actually have to know the answers to the questions and can, instead, come up with a plausible lie and try to get it over the other players.

The board is a spiral, progressed around in ever decreasing sections with a safe point at each stage of the spiral. If your lies are found out (or you call a player out on a lie that turns out to be true), you get knocked back to the last safe point. It is, of course, safer to tell the truth all the time but, since you can’t win unless you DO lie, you’ll have to try and sneak an untruth past the other players.

The game won the “Best Party Game” in Birmingham and looks like a lot of fun, the element of bluff and counterbluff should also make this more interesting to gamers than other board games, and there’s a real sense of triumph in slipping a lie past the other players.

Their second game, currently available, is Eurobabble, a game that plays on the fact of British uselessness at foreign languages, a stereotype that probably can travel to other nations. Players divide into teams and each turn a spinner is spun, revealing which card (word, accent, action, or question) is used. Actions are mimed, trying to evoke the nation through your physical behavior, words are where you try to guess the foreign equivalent to an English word, accents are where you put on an outrageous accent, outdoing Inspector Clouseau, and questions are asked in the foreign language and you try to decipher what the question is and answer it.

Every guess you get right earns your team a badge from the foreign nation on the card and once you have all of them (German, Dutch, Italian, French, and Spanish) your team wins. A game, perhaps, best lubricated by beer but a lot of fun once your inhibitions are chipped away at and a good way to practice your accents for when you’re playing NPCs, perhaps.

Their last game at the convention was Gentleman Gamer, which is a game with a variety of sub-games in which you take on the role of a gentleman gambler in the Victorian period, setting your footman against the footmen of other gentleman in a variety of races and sports in order to win as many guineas as possible and humiliate your opposition. Watching the game being played, the players really got into it and it almost became a more formal version of The Adventures of Baron Munchausen as the sly insults and outrage flew, the stakes grew and “tempers became heated.” The game is only in prototype at the moment but they hope to have a more complete version available by spring or summer.

Trying out a new column today. Except, now I’m all sad because I couldn’t go to the con. Well, this is the next best thing!

(Come back tomorrow for part 2.)

If you were there, let us know below.