Skip to content
Home / Delve into the Depths in the Kobold Blog / Getting a Grip: Pinning Down Pathfinder’s Grappling Rules 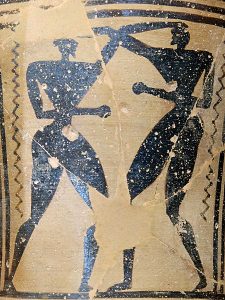 We’ve all been there. Your party is advancing on the huge, slavering beast that’s roaring and coming right at you. Your paladin is calling on his god of the sword, your wizard is summoning eldritch powers, and your barbarian is readying to charge with a hideous grin on her face. And then, due to a fluke of high initiative or a surprise round, the beast goes first. It snatches up one party member after another, crushing them in its grip and lifting them off the ground, rendering all the party’s deadliest tactics completely useless. Grapple has, once again, thoroughly buggered your strategy.

Grappling in “Pathfinder Chronicles” is one of those optional rules that all players know about, but which they rarely see. Part of it is the bad rep that the grapple maneuver is still carrying around from 3.5, and part of it is that grappling is not a big, flashy, damaging maneuver. It’s a walking status condition. As much as players might thumb their noses at grapple, everyone who’s been on the receiving end of it knows just how tide-turning it can be as a strategy. So, why not build a canny wrestler to give the DM a taste of his or her own medicine?

Starting Off: What to Look For

When you’re building a grappler, there are certain things you need to take into consideration. For instance, you will need:

–      A high base attack bonus. Your BAB figures into your CMB as well, and it will be a deciding factor.

Next Step: Best Base Classes

Once you know what you’re looking for, you need to see which base classes offer you the best options for what you want to do. Some of them are better than others, but the following classes all allow you get up close and personal with the baddies you’ll be facing.

Monks are the obvious choice for a grappler. They’re fierce unarmed combatants. Their unarmed damage will go up over levels, which means that when you choose to crush grappled or pinned opponents, you can do more damage to them. Monks can choose Improved Grapple at level one, making them dangerous in close combat from the get-go.

The maneuver master offers monks the ability to perform extra combat maneuvers as part of a flurry of blows (regardless of whether they would normally take a standard action—a valuable ability), it allows them to use their monk level instead of their BAB on CMB checks, and at higher levels it allows these monks to take attacks of opportunity against opponents that try to grapple them first. Very versatile.

The tetori is a monk that focuses purely on grabbing an enemy and holding on tightly until that enemy is crushed. A tetori can negate penalties from the grappled condition, use the monk’s level instead of BAB on CMB and CMD checks, and, as he advances in level, hold on to creatures despite freedom of movement or even negate polymorph effects. Tetori can even grapple incorporeal creatures at the higher levels.

The brutal pugilist gains abilities in two directions; the first is to negate negatives on herself when gaining the grappled condition, and the second is to gain attacks of opportunity when other creatures attempt to grapple her. Additionally, by level 5, the brutal pugilist is considered a size category larger when determining whether she can grapple or be grappled by another creature. That’s quite a feat, and it can even up the scales when fighting bigger creatures. Any and all abilities that modify your CMB or CMD, such as the strength surge rage power, are a great boon to this build.

Watch for the second part of this article next week! Neal tackles some more classes, plus gives you some other useful suggestions and tips.

6 thoughts on “Getting a Grip: Pinning Down Pathfinder’s Grappling Rules”