Skip to content
Home / Delve into the Depths in the Kobold Blog / The Con Report: Indiecon (Part 2) 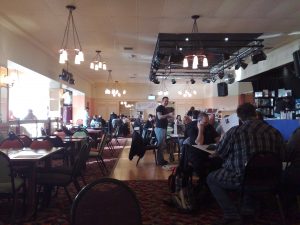 (This is a continuation of yesterday’s Con Report, already in progress. Please, turn off your cell phones , and find a seat. Please, place your trash in the trash receptacles on your way out.)

Cubicle 7 (www.cubicle-7.com) were present, in force, running demos and substituting a little for Mongoose Publishing, who weren’t present. GM screens were available for Victoriana and Starblazer Adventures, and these are good, sturdy, very presentable screens about the thickness and toughness of the cover of a good hardback. Supplements for the translations of 7eme Circle’s game Qin were also present but what everyone was most excited to see was the proof copy of Doctor Who…

The Doctor Who box looks considerably more sturdy than the box sets of old and it looks like it should survive a bit of bashing around, going to and fro between games. The box comes with dice and separate booklets containing everything people might need to play, along with pre-generated characters for key series characters such as Captain Jack and a few pre-generated assistant stereotypes that people can make their own in a fashion reminiscent of The D6 System’s templates or, of course, you can make your own character up from scratch.

The presentation of the game compares favorably with Eden Studios tie-in games such as Buffy and Angel though perhaps targeted a little younger. I wasn’t able to participate in a demo game, unfortunately, but it seems to be a workmanlike synthesis of the plot/narrative oriented new wave games and something with enough crunch and definitive rules to satisfy more conventional gamers. With the looks, the completeness, and the subject matter this should be a suitable game for bringing new people into the hobby.

Despite the best intentions I didn’t get to have a good, long chat with Sceaptune Games (www.sceaptunegames.co.uk) over the weekend, aside from a couple of brief exchanges. They were there selling their celebrated RuneQuest books as well as being there to launch Hyperlite. A science fiction game based on the new Traveller rules but set up as a sort of Roman Empire in space with a heavy emphasis on archaic weapons and melee combat, due to a treaty-enforced ban on the high-tech weapons, which might, otherwise, devastate the universe.

Collective Endeavour (www.collective-endeavour.com) are maintaining a slow but steady production of new, small (or slimline), game materials. New products this time around included Revenge of the B-Movie 2 (a card game of overblown B-movie titles), pin badges for 3:16, Cold City, and Hot War and special hardback editions. Also new on sale was Beat to Quarters, a new game using the same system as the Napoleonic soldiery game Duty & Honour with adaptations to the setting and character of the new game. Duty & Honour was played loudly and with obvious enjoyment, and Beat to Quarters looks like it should be just as much fun with the right group.

The pin badges for the three games were, for me, the real stars here and immersive/identification materials for games that go beyond t-shirts. They are things I wish more companies would do and wish I could do as well!

From the same unstable mind that brought us the serial-killing Pie Shop comes Hellcats and Hockeysticks, which is best described as The Girls of St Trinians on crack. The players take the part of girls from the school, originating in different cliques such as coquette and goth and deal with increasingly bizarre situations afflicting the school that’s, basically, under the control of its conscienceless boarders. This could be anything from zombie invasion to an infestation of ninja Japanese exchange students, to threats made towards the school from the government. Maybe the parents have found out too much, or there’s an ancient burial ground beneath the school that’s raising ghosts and leading to problems with TV reception, possession, and copious vomiting.

There’s a definite strange edge to this game that isn’t necessarily found in the source material. Mad science and the supernatural get a strong emphasis alongside the naughty schoolgirl antics that are, otherwise, the main material of the book though, since the players are the ones playing the naughty schoolgirls there is, perhaps, a little less of the obvious sexual exploitation than there might otherwise be.

The game only exists as a prototype thus far, but it appears excellent for all that and already looks polished and professional with some excellent artwork, particularly for the cliques that dominate the school, named after the goddess of chaos Eris—appropriately enough. It’ll be nice to see the finished version up for sale and whether gaming groups can get a handle on playing schoolgirls!

Bob, who confusingly shares his nickname with me (Grim) is just about omnipresent in the UK con scene and has a good selection of second-hand and popular books on his shelf, but his main focus is selling dice, all sorts of dice. Just about any and every variety of dice you could ever consider getting—and then some. Not to mention all the dice accessories, bags, pots and so forth as well as his own line of dice and dice games, many of which are taken from historical games. If Bob can’t get you something right then and there, he’ll move heaven and earth to find it for you, and if it exists, odds are he’ll get it. Bob’s a gentleman and a scholar, a man who really, really knows his stuff and now has a website where you can get much the same treatment, www.reapersrevenge.co.uk.

As well as the games of these companies, I was able to run some successful demos of my game Blood! and to playtest Agents of S.W.I.N.G. There were plenty of other indie games being played including Poison’d, Misery Bubblegum, Umlaüt (a rather excellent, GM-less Heavy Metal band game) Dread, Reel Adventures, and many, many more including the launches of Hyperlite and Omnifray Light, a smorgasbord of indie games for people to sample, appreciate and purchase directly from the producers or from Leisuregames (www.leisuregames.com), who were also present.

Indiecon is still finding its feet as a convention, though it is growing steadily. It suffers a little from inevitable comparisons with Conception and Consequences, which are held at the same site, but it is slowly gathering its own reputation and its own distinct identity. From a trading point of view, it still needs to improve as sales aren’t fantastic, but as a resource for indie writers for play testing and generating word of mouth, it’s invaluable.

For the players and gamers, Indiecon is pure, distilled, essence of awesome. There’s a lot of games being run, and this fills a gap that’s missing in the larger conventions where organized play tends to squeeze out delegate-organized events and indie games.

Both for business and pleasure, Indiecon is definitely going to remain a permanent fixture in my gaming calendar, and it restored my love for gaming this year. It was like travelling back in time to the heyday of my gaming, a houseful of friends just enjoying themselves with games every night, and that’s a friendly feel that a lot of cons simply don’t have.

Time to start saving my pennies.