Skip to content
Home / Delve into the Depths in the Kobold Blog / Warlock’s Apprentice: Debris of the Great Mage Wars 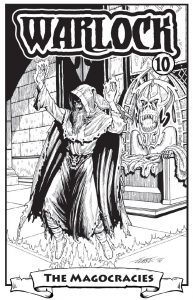 The departure of the elves and the resulting conflict shaped Central Midgard in fundamental ways. At its core, the Great Mage Wars rise out of the hubris of the Fulgurate Society and leave behind a monument to humanity’s capability for destructive spite.

Legacy of the Fulgurate Society

It began as a joke, a thumbing of their collective noses at the Elvish Empire of Valeran, the snide comments about humans being “all thunder and no lightning,” when the Founding Circle of the Fulgurate Society chose their name in a secret gathering atop an old imperial tower. But from those humble beginnings, nine arcane spellcasters went on to carve out nations of humanity built on a foundation of great skill and art. The magocracies quickly achieved a begrudged parity with the Elvish Imperium, fueled by potent works and no lack of ambition. Initially, they strove to make their endeavors beautiful, functional, grand, and robust. Their spells pushed boundaries, their construction left one breathlessly awestruck, and the Fulgurate Society grew to serve as part of their shared heritage, an informal social organization, helping to avert misunderstandings and allowing backchannel communications. They labored to cease hostilities by denying access to those powers who overstepped treaties and by undoing the machinations of the treacherous mages who disobeyed their edicts or neglected unspoken rules and codes between their respective territories. Unfortunately, the Fulgurate Society was only human, and flaws of tangled emotion and spurned feelings eroded the foundations of their wondrous achievements. Resentment and jealousy festered, and as the Great Retreat concluded, the magocracies turned upon each other before a season had passed, attempting to claim the remnant vacuum.

Initially, in the wake of Luz’s Escalation and the resulting Slumber of the Isonade, each magocracy controlled a Dread Walker, but the devastation left in their wake, combined with the ruthless spell effects of the great magi, embittered many. The destruction of Molovosch particularly weighed upon Enkada Pishtuhk, one of the more powerful and prominent members, and in the next gathering of the Fulgurate Society, supposedly in a declaration of vengeance related to a lost love, he utilized the nexus of ley lines once centered on the Lost Tower to summon Pah’draguusthlai while sinking the tower and its Glyph Stair perpendicular to reality. The resulting destruction of Uxloon suggests truth in the rumor. The magocracies fought for two full years after that betrayal before members finally managed the massive ritual invocation locking the remaining Walkers in their current dreaming stumble. However, the damage was complete; the glory and potential of the magocracies lay burnt from the land, leaving the smoldering cinder of the Wasted West and a few mystical heirlooms left to be discovered, in secret caches of scrolls and manuscripts, by the intrepid, persistent, and lucky.

Spellcraft of the Lost Magocracies

Presented below are a few lost secrets of the scions of Vael Turog.

Talons of a Hungry Land

When the lines appear, each creature within their area must make a Dexterity saving throw. On a failed save, a creature takes 8d8 slashing damage or half as much damage on a successful save.

A creature can move through the lines at the risk of cutting themselves on the exposed edges. For every 1 foot a creature moves through the lines, it must spend 4 feet of movement. Furthermore, the first time a creature enters the lines on a turn or ends its turn there, the creature must make a Dexterity saving throw. It takes 8d8 slashing damage on a failed save or half as much damage on a successful one.

When you cease concentrating on the spell, you may cause the obsidian spikes to explode, causing 5d8 slashing to any creature within 15 feet or half as much damage on a successful Dexterity save.

At Higher Levels. When you cast this spell using a spell slot of 7th level or higher, the damage from all effects of the lines increases by 1d8 for each slot level above 7th…