Skip to content
Home / Delve into the Depths in the Kobold Blog / Grand Duchy: Grandma Volksleek and the Huginn Shipwrights of Gemport 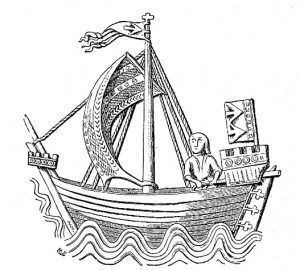 The black-feathered and sharp-beaked huginn clamber upon the ribbed frames of unfinished vessels in Gemport’s ship construction yard, mallets, saws and measuring sticks in hand. In a town famous for its many skilled shipbuilding companies, the descendants of Grandma Volksleek have carved out a spot of distinction. The cogs of dark wood that leave the huginn yard have a reputation for durability, which makes them much valued as freight haulers across the Nieder Strait. This conspiracy of huginn, like many enclaves of the so-called “minor races” of the Grand Duchy, has been fostered by the domain’s long and stable rule of Imperatrix Regia Moonthorn. Immigrants discover that a willingness to work hard and set prejudice aside earns them protection under the law.

Grandma Volksleek was the enclave’s founder. Volksleek, who was neither grandmother nor shipwright when she arrived four generations ago, lived down a reputation as one of Domovogrod’s foremost “secret-keepers.” She had been an agent of that nation’s crown, keeping the winter prince’s many confidences secret by spreading misinformation in counter-intelligence efforts, and as a last resort, employing assassination. But her methods were met by disapproval by the chief druids. Rather than submit to their certain justice, she fled.

Volksleek sought refuge in Gemport. She also found a new purpose, gaining employment in a flagging shipbuilding enterprise run by the elfmarked shipwane, Jonger Pitch. Soon, she was writing to other huginn agents in her disbanded network, inviting them to Gemport, promising them fair treatment for good honest work in Pitch’s shipbuilding yard. Within a few years, she had populated the huginn nest. As crafty in commerce as she had been in intelligence-gathering, Volksleek also transformed the business. It grew to the point that Volksleek bought it outright from Pitch, who retired on the proceeds.

Volksleek made the business the heart of the growing, yet tightly knit huginn community. She also started a family, and her descendants continue to operate the shipbuilding business. Brida Volksleek is currently the nest’s leader, though day-to-day shipbuilding operations rest beneath the wings of her brother, Pali.

Gemport’s huginn are respected for their industry and skill at shipbuilding. Individual huginn sometimes leave the nest to become adventurers or seek their fortune in the larger cities of the Grand Duchy. Others try establishing their own shipbuilding sites elsewhere along the Nieder coast.

The family is still good at keeping—and discovering—secrets. Grandma Volksleek never completely abandoned her affinity for spycraft. Grandma Volksleek was fond of saying: “A watchful eye is a knowing eye.” If not a family motto, it is certainly espoused by those in the nest for whom spycraft was passed down. Most of Volksleek’s agents work as carpenters on the cogs they build, serving the ship’s masters as all-purpose repairers. In foreign ports, the carpenter-agents make contact, exchange information (or misinformation, as needs be) and return to Gemport with the news.

Out of loyalty to the land that shelters them, the Volksleeks make sure these nuggets of information reach the right ears in Regia Moonthorn’s inner circle. While not “official” agents, the Volksleek are nevertheless seen by the crown as reliable. As thanks for their contribution to the realm, plum shipbuilding contracts are sometimes granted to the Gemport huginn.

2 thoughts on “Grand Duchy: Grandma Volksleek and the Huginn Shipwrights of Gemport”