Skip to content
Home / Delve into the Depths in the Kobold Blog / Monday Monster: Brainstalk Fungus 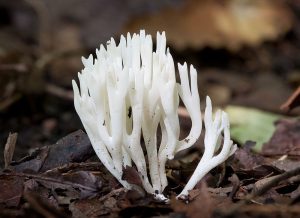 The thing appears to be a small lump of green or pale pink vegetable material with two thin stalks protruding from its central, ball-like mass. The surface of the ball is wrinkled and creased. Despite its appearance, it… it is irresistible…

SPECIAL ABILITIES
Mind Stun (Sp) If it is in danger or if a nearby creature has not been affected by its mental lure, the brainstalk fungus (also called cordycephalis) uses its mind stun ability. It can target any creature with an Intelligence score within 30 ft., who must then succeed a Will save (DC 12) or be stunned for 1d4 rounds. The brainstalk fungus can use this ability once every 1d4 rounds as a spell-like ability.

Parasitic Spores (Ex) Any creature that touches or consumes the stalks of the brainstalk fungus is subject to parasitic spores.

When a creature reaches 0 Intelligence, it dies and sprouts a new brainstalk fungus, which slowly consumes the corpse.

Psychic Lure (Su) The brainstalk fungus constantly projects an aura of psychic energy that attracts creatures to it. Any creature within 60 ft. of the fungus that possesses an Intelligence score must make a Will save (DC 12) or be drawn toward it. Upon reaching the fungus, the affected creature feels compelled to touch or consume the stalks of the brainstalk fungus, infecting the creature with its parasitic spores.