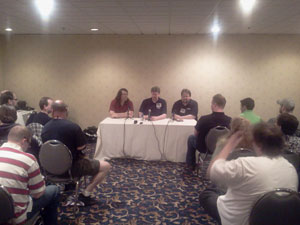 Stephen Radney-MacFarland, Jason Buhlman, and James Jacobs took the time to tell a room full of rapt gamers and would-be designers how to build rules, characters, and magic that work both for homebrew campaigns and for professional pitches. Some of the highlights from PaizoCon’s Crafting Rules that Work seminar are beyond the jump.

Compare your design to what’s already out there in the system to determine balance and playability. For example, if it is a damaging fire spell, is it more or less powerful than a fireball spell? Also, you don’t need to make things bigger just to make them bigger. (In other words, you don’t need to do this: “Look! I created a 3rd-level super fireball spell! It does 2d6 damage per level!”) It serves no creative purpose and creates imbalance in the game.

After you write it all down the first time, let it sit for at least 24 hours, then look at it with fresh eyes. Does it still work? Read it aloud. Does it still make sense? Cultivate honest friends whose opinions you trust, and have them look at your ideas and provide constructive feedback.

When you are thinking of changing something, don’t get too attached to it (if freelancing) or set it in stone (if for your home game). A few hours of play(testing) might show that your design is too weak, or worse, too powerful. If you are freelancing and your editor says your favorite homebrew elf archer, whom you’ve played for ten years and added to the project, doesn’t fit with where the project is going, don’t argue with him or her. Instead, find something even more awesome to wow your editor. If your players say the villain with the continuous sure strike sword is too powerful, have the villain lose or break the sword (or use Jason’s favorite method: “Have the Balor show up and ask for his super-sword back!”).

Don’t get stuck fighting with formulas, especially with magic items. Start with an idea or a flavor that is interesting for you, figure out how you want to use it, and worry about the stat blocks later. “It’s the exception that makes the rule.”

Give the players ways to feel special and heroic at the end of the day. Backstory for magic items is great for this. Another 100 gold and a +1 longsword is not nearly as interesting as gaining “the golden signet ring of the knight-commander and the Lost Sword of the Sorcerer-Kings” can be to a player.

Keep the tips above in mind if you’re interested in pitching to Kobold Quarterly! For more tips, watch for upcoming articles that cover the Saturday seminars at PaizoCon 2011.

1 thought on “Words of Wisdom for Designers”