Skip to content
Home / Delve into the Depths in the Kobold Blog / Tome of Beasts: Kikimora 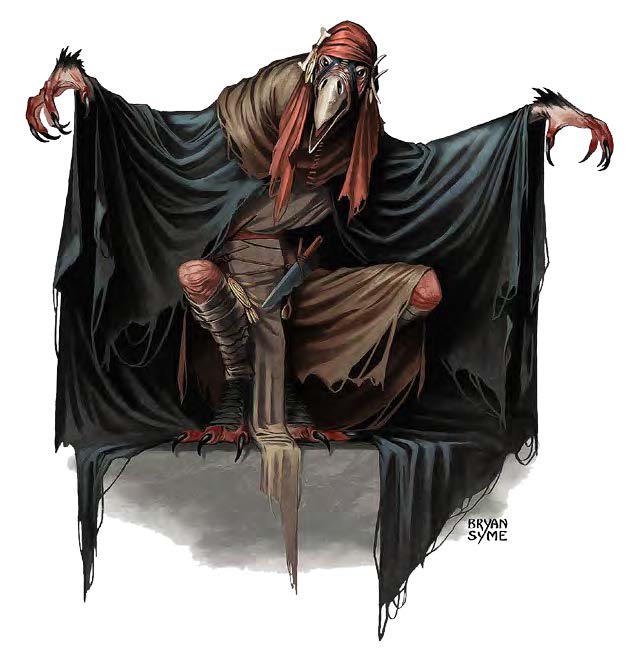 This strange-looking humanoid combines the features of an old crone and some manner of bird. A shawl covers her head but cannot contain her prominent beak and clawed hands. Her skirt reveals bird-like feet.

Filthy Illusions. Kikimoras are devious house spirits who torment those they live with unless they are catered to and cajoled. They delight in harassing homeowners with their illusions, making a house look much filthier than it actually is. Their favored illusions include mold, filth, and scuttling vermin.

They love secretly breaking things or making such destruction seem like an accident. They then convince the house’s residents to leave gifts as enticement for making repairs in the night.

Brownie Hunters. Kikimoras hate brownies. While brownies can be mischievous, kikimoras bring pain and frustration on their housemates instead of remaining hidden and helping chores along. Some brownies seek out kikimora‑infested homes with the intention of evicting them.

If homeowners refuse to appease the kikimora (or cannot rid themselves of her devious presence), the kikimora sends a swarm of spiders, rats, or bats. Many times inhabitants in a home plagued by a kikimora believe it is haunted.

Fast Talkers. While they try to avoid notice and aren’t great talespinners, kikimoras are convincing and use this influence to gain an upper hand—or to evade capture or avoid violence.

Magic Resistance. The kikimora has advantage on saving throws against spells and other magical effects.

Innate Spellcasting. The kikimora’s innate spellcasting ability is Charisma (spell save DC 15). She can innately cast the following spells, requiring no material components:

Hidey-Hole. When a kikimora chooses a house to inhabit, she scrawls a symbol on a wall, baseboard, cupboard, or semi‑permanent object (like a stove) to be her tiny domain. This ability creates a hidden extra-dimensional dwelling. After creating a hidey-hole, a kikimora can teleport herself and up to 50 lb of objects to the designated location instead of making a normal move. This extradimensional space can only be entered by the kikimora or by a creature using a plane shift spell or ability. The location can be determined by casting detect magic in the area of the sigil, but it takes a successful DC 15 Intelligence (Arcana) check to plane shift into the space.

Inside the hidey-hole, a kikimora can see what is going on outside the space through a special sensor. This sensor functions like a window, and it can be blocked by mundane objects placed in front of the sigil. If she leaves an item in her space, it remains there even if she removes the sigil and places it in another location. If someone else removes the sigil, all contents are emptied into the Ethereal Plane (including any beings within her hidey-hole at the time). In this case, the kikimora can attempt a DC 15 Charisma saving throw to instead eject herself (but none of her possessions) into a space adjacent to the sigil.