Skip to content
Home / Delve into the Depths in the Kobold Blog / Howling Tower: The Tongue-Tied Bard 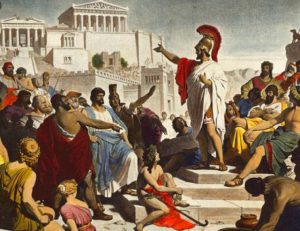 The introduction of skills into D&D and its offshoots solved some important problems in the game, but those solutions came with costs of their own.

The earliest editions had rules for fighting and not much else. That’s not surprising, considering they were written by wargamers, for wargamers. No one yet understood what a roleplaying game really needed or how varied play could become. The first skill-based class, the thief, didn’t appear until the first expansion. Try playing the game for a while without a character who can pick locks or disarm traps and you’ll see why thieves were needed. (In some recent, nostalgic OD&D sessions, a common joke was when a character would muse dreamily about a far-off, mythical land called “Greyhawk” where there existed people known as “thieves” who could somehow open a lock without hacking it into ruin with an ax. It was even said that if they pressed an ear to a door, they could sometimes actually hear sounds on the other side!)

Hold it right there. If barbarians need a skill to climb trees, does that mean my fighter, who lacks that skill, can’t climb trees? He’s been climbing trees since he was 1st level. It happened every time I told the DM, “Thorstein climbs a tree.”

It turns out that while skills are a great way to model certain situations, they are not a universal solution. Here are a few reasons why.

Inclusion = Exclusion. Already covered this one. If you make a rule that A is necessary for B, you are also making a tacit rule that B is not possible without A. That’s true in some cases but false in others. Anyone can throw a knife at a wall and get it to stick sometimes. The difference between trained and untrained throwers is how many times their knives hit point-first. Likewise, anyone can put a knife into a sick person and cut him open. The difference between trained and untrained surgeons is that the patient probably will be better after the trained surgeon cuts him or her, but certainly will be dead after the untrained one hacks him up. Throwing a knife and healing with a knife are fundamentally different types of skills. How many more types can you think of, and how many different skill systems do you want in your game?

The Ginsu effect. The sharper the knife, the more thinly the tomato gets sliced. Sometimes a thicker tomato would be tastier, but if the chef is into ninjutsu, you should expect tomato wafers. Are rowing and paddling two different skills? In real life, yes, they sort of are—except for where they overlap in needing to know something about moving on water. No matter where the line gets drawn, it will be right for some situations and wrong for others.

Context is everything. If Thorstein is in a canoe, then paddling is the skill for him. If he’s in a dinghy, then rowing is the way to go. Today he’s lying flat on a log, trying not to get washed over the waterfall. Is he rowing, or paddling? Is using a log as the world’s worst boogie board “boating” in any sense of the term? Maybe this is a case of athleticism, or swimming, or plain luck. If the example seems silly, remember that a big part of being an adventurer is finding yourself in outlandish and unexpected situations. Those are, pretty much by definition, tough to prepare for.

No matter how much a game designer codifies, skills always will come down to a GM making a call. So why is one type of call better or worse than another?

One example gets bandied about endlessly in every discussion of skills: the tongue-tied bard. The argument goes like this: Some players are real-life smooth talkers and some are shy mumble-bums. An RPG is the perfect opportunity for a monosyllabic grunter to become a fantasy Winston Churchill. Give his character Diplomacy +20 and put a die in his hand, and the world is his radio audience. The GM knows that the queen’s biggest concern is her daughter’s safety. She tells players, “the queen looks dubious about your request.” The not-very-glib-in-real-life player says, “I tell her that her family is in danger if we don’t get her help.” The GM understands that’s probably the most impassioned plea this naturally inarticulate player can muster, mentally beefs it up to account for the fact that the character is a silver-tongued charmer, notes that it rang the all-important family gong, assigns a DC she expects the player to beat, and asks for a roll.

Now consider the alternative. The GM knows that the queen’s biggest concern is her daughter’s safety. She tells players, “the queen looks dubious about your request.” The not-very-glib-in-real-life player says, “I tell her that her family is in danger if we don’t get her help.” The GM understands that’s probably the most impassioned plea this naturally inarticulate player can muster, mentally beefs it up to account for the fact that the character is a silver-tongued charmer, notes that it rang the all-important family gong, and says, “the queen accepts your offer.”

Are those two examples any different, really? Both involved a player declaring an action and a GM judging the likelihood of success based on flexible conditions. In neither case was the player penalized for not channeling Pericles in his speech, and he was rewarded for pushing the family button. I’d say they were about the same.

Are skills necessary? Is it better to slice them thick or thin? Define them tightly or loosely? I’d like to see the opinions of others on this important question.