Skip to content
Home / Delve into the Depths in the Kobold Blog / Out of the Frying Pan: Into the West

The land ages and withers, desiccating with every mile. Unbidden thoughts and images of ancient atrocities arise, and you imagine the drifting residue of forgotten holocausts, swirling in the blowing dust. The wind picks up, and the clouds darken with each hurried stride, drawing you farther into the Goblin Wastes. Soon you’ll close within striking distance of your quarry and, unfortunately, the notorious Flensing Gulch.

Art thief and black-market antiquities dealer Jhaelyn “Nine Fingers” Nox is on the run. A known associate of Mikhail “the Stoat” (see Warlock #10), Nox is being sought by the Lords Arcane and Loremasters of Salzbach. It’s confirmed that Nox took possession of several relics of the lost magocracies (see Warlock #10) from the Stoat along with clues regarding how and where they’d been unearthed.

Do PCs operate under agency of the Loremasters or Lords Arcane? Does an ally or patron desire information Nox has? Are particular objects or knowledge needed by PCs or stolen from associates?

Jhaelyn Nox is a scorpion assassin (see Creature Codex), changing to CR 10 and adding the following:

Encounter 1: And They’re Off!

Fifty miles southwest of Salzbach and forty miles behind you, the Bone Road meets the long eastern arm of the Mage Road. There, after exchanging codewords with informants, you learn your “objective” altered course southwest into the wasteland. Nox was making a run for that perpetually haze-smeared section of horizon, marking the northern ingresses of Flensing Gulch. Cresting another rise into a now howling wind reveals the approach to Flensing Gulch and your prey just visible through the rising dust clouds. Unfortunately, he’s about to have more company than anticipated.

Developments. Nox moves deftly through the mounting dust storm, 600 feet (GM’s discretion) from the PCs. Another motley band of would-be heroes, 500 feet north of Nox, tracks an intercept course, presumably Loremaster (or Lords Arcane) agents also employed to secure Nox for transport back to Salzbach. GMs can assign class/race specifics to the “bad-guy” adventurers or use two devilbound gnomish princes, two Emerald Order cult leaders (see Tome of Beasts), two warpriests, and three thief lords (see Creature Codex). They gleefully attack interfering PCs: first, intent on eliminating potential rivals and, then, on capturing their quarry. Nox uses every asset and ability to remain disengaged from everything, continuously maneuvering toward Flensing Gulch. The rising (GM’s discretion) boneshard sleet storm (see Magic in the Wastes in Midgard Worldbook) aids in Nox’s evasion and escape attempts, interfering with Perception, flight, and so on. This “running fight” decreases the distance to Flensing Gulch. 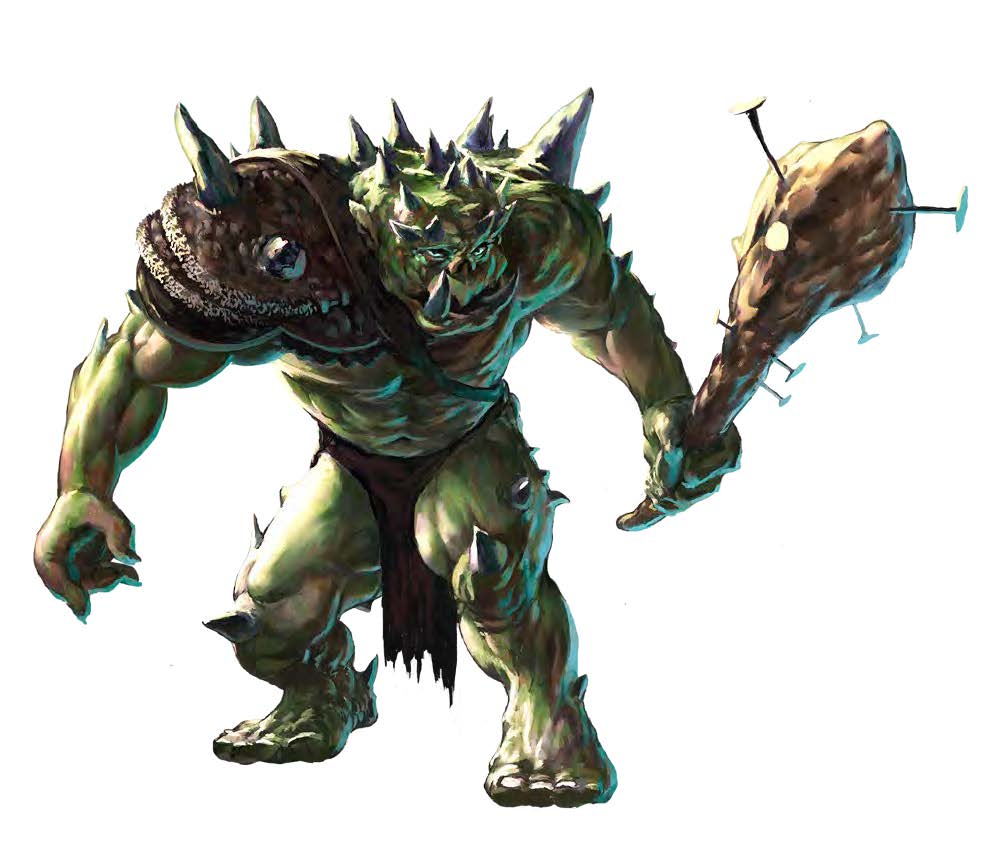 Over the clamor of arms and howling winds, you hear a chilling, staccato cadence, multiple rattling drumbeats rising from the dust-shrouded canyons beyond. Then blood-curdling caterwauling erupts, a hellish chorus of trilling war cries and gibbering shrieks pierce the air as streams of dust goblins pour from Flensing Gulch. On the goblins’ heels, huge, malformed-shapes trudge into view, ogres of some kind but warped, mutated. Harnessed to their backs, diminutive “riders” peer over bone-plated shoulders.

The swirling dust clouds and scouring sleet obscure the source of a huge shadow, passing over the battlefield. Shear winds buffet downward in a tempest of ash and bone grit as a gigantic, cadaverous bird lands 100 feet away. A cold, metallic voice resonates from within the spiked, black-iron helm of its faceless, armor-plated rider.

“I am Vul-Thoc Thrang, Margrave of the Lake of Bones and herald to Archmage N’lok Thrang. I am the Ferryman come to take you all home.” 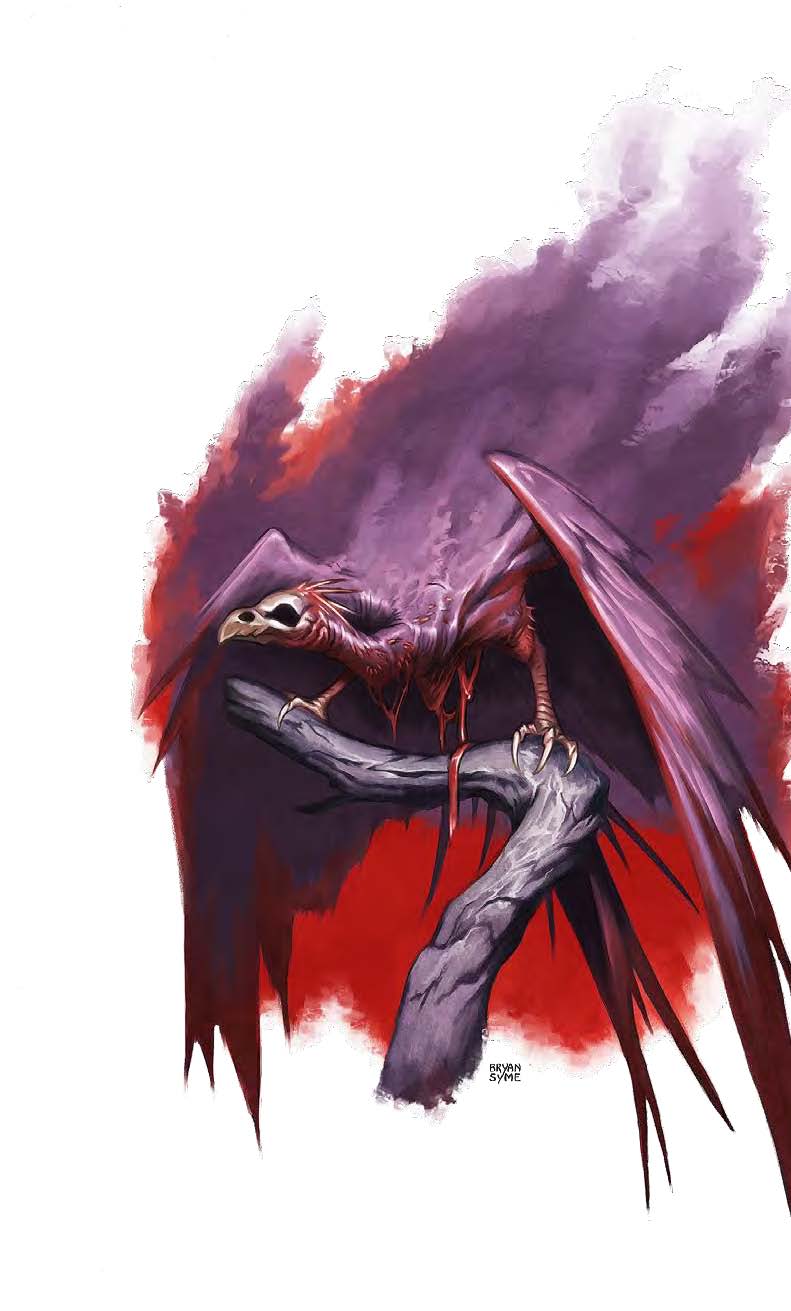 A mask wight remembering its name? Impossible! A DC 20 Wisdom (Perception) check notices the iron nails pinning the wight’s mask to its face have been removed and re-nailed in new positions. A DC 22 Intelligence (Arcana) check recalls lore surrounding the ancient arcanist N’lok Thrang (see Warlock #10), crazed hermit and reclusive wanderer of little means who was nonetheless a onetime member of the fabled Fulgurate Society and a noteworthy power player throughout the early mage wars. Ancient texts assert N’lok Thrang had the blood of tens of thousands on his hands before he died.

Developments. The undead phoenix (see Creature Codex) and its mask wight rider (see Tome of Beasts) attack PCs until either drops below 50% hp. The wight then gates a boneshard centurion (use devil, infernal knight, changing alignment to chaotic evil, see Creature Codex). If any of these three are slain, a psychic cry goes out.

“Father, we falter. We beseech you—” only to be interrupted by a gentle, reassuring voice somehow audible above the maelstrom. “Be still my children. These others will harm you no more.”

“Apologies. I came only for Jhaelyn Nox. He’s returning some old… things of mine, but now, methinks, I’ll add you to the collection as well.”

While his pleasant form and demeanor never change, Old Dust Howler is a lich. If alive, Nox (under a geas for months by Thrang cultists in Salzbach) joins his undead master’s attack.

Surviving PCs will have questions and decisions aplenty. Will they transport (resistant) Jhaelyn Nox to Salzbach for “extractions” and reward? Or will PCs extract information from Nox? Where and what is the Lake of Bones? Was that truly the lich of N’lok Thrang? What is their connection to each other, and what’s in that magic bag?