Skip to content
Home / Delve into the Depths in the Kobold Blog / Magic & Munchausen: Mythical Items from Classical Literature

The Surprising Adventures of Baron Munchausen by Rudolf Erich Raspe (1736-1794) is one of the most widely known examples of proto-fantasy. In the book, which narrates the astounding and weird deeds of the fictional German adventurer, we can find a lot of elements familiar to tabletop RPG players, including monsters, space travels, fantastic places, and, yes, magic weapons. Stats for two of them are provided below.

Weapon (handaxe), rare (requires attunement by a creature of any chaotic alignment)

“I had nothing like an offensive weapon in my hands but the silver hatchet, which is the badge of the Sultan’s gardeners and farmers. I threw it at the robbers, with an intention to frighten them away, and set the poor bee at liberty; but, by an unlucky turn of my arm, it flew upwards, and continued rising till it reached the moon.” (Raspe, The Surprising Adventures of Baron Munchausen)

The baron uses this hatchet during his adventures as a weapon but also in other strange ways: he is capable of employing it as a tool for returning home from the moon itself! The axe can, in fact, extend the length of ropes to incredible limits… and using one of his unlimited cords, Munchausen was able to cover the distance from earth to its satellite.

This item is a small curved handaxe made of solid silver, covered in abstract arabesques. It has the following properties.

Mythic Instrument. You gain a +1 bonus to attack and damage rolls made with this magic weapon. The axe is also silvered.

Till the Moon. The Silver Hatchet has a normal range of 300 feet and a maximum range of 1,200 feet.

Symbol of Guildship. You are always considered to be a member of the gardeners’ guild. You obtain the Guild Membership feature of the Guild Artisan background for free, and you never have to pay the guild monthly fee.

Cutting and Knotting. With a successful DC 10 Dexterity (Sleight of Hand) check, you can double the length of a target nonmagical hempen rope. This action requires one minute, and you can perform it more than one time per day. After every attempt, however, the DC increases by 5 points. When you finish a long rest, the DC resets to 10. 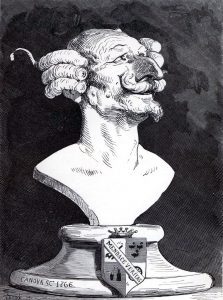 The Sling of David

Weapon (sling), very rare (requires attunement by a creature of any chaotic alignment)

“He was walking by the sea-shore at Harwich, with this sling in his pocket; before his paces had covered a mile he was attacked by a fierce animal called a seahorse, open-mouthed, who ran at him with great fury; he hesitated a moment, then took out his sling, retreated back about a hundred yards, stooped for a couple of pebbles, of which there were plenty under his feet, and slung them both so dexterously at the animal, that each stone put out an eye, and lodged in the cavities which their removal had occasioned.” (Raspe, The Surprising Adventures of Baron Munchausen)

This is the weapon that killed Goliath the Giant in the old Biblical texts. It has come to the baron through his great-great-great-grandfather and has served his family during the centuries. Strangely, every Munchausen has added new elements to its legend, listing new powers and capabilities for the weapon…

The sling is made of ordinary leather and has no distinctive features. It is a powerful item, however: you gain a +1 bonus to attack and damage rolls made with this magic weapon. It also has the following properties.

Giant Killer. When you hit a giant with this sling, the giant takes and extra 2d6 bludgeoning damage and must succeed on a DC 15 Strength saving throw or fall prone. For the purpose of this weapon, “giant” refers to any creature with the giant type, including ettins and trolls.

Explosive. One time per day, you can transform this weapon into a sort of grenade launcher. Select a point up to 30 feet away and expend a bullet. Each creature within 10 feet of that point must make a DC 15 Dexterity saving throw, taking 2d6 piercing damage on a failed save or half as much damage on a successful one. Moreover, the bullet unleashes an explosion audible out to 300 feet.

Beast Tamer. The sling also has 5 charges. While attuned to it, you can expend 1 charge and make a ranged attack with it. If you hit and the target is a beast, it must succeed on a DC 15 Constitution saving throw or be blinded and charmed for one minute. The sling regains 1d4+1 expended charges daily at dawn.