Skip to content
Home / Delve into the Depths in the Kobold Blog / Monday Monsters: Nihilimentis 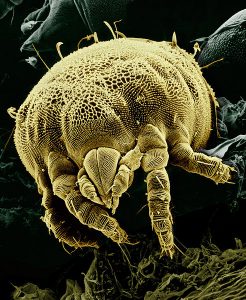 Bred to exterminate all sentient life in the natural world, nihilimentii were created as living weapons in the ancient cosmic war between the gods and the primordials.  The psychic vibrations of intelligent creatures cause nihilimentii physical discomfort, driving them to a solitary existence.  In fact, other creatures’ perceptions of the nihilimentii create painful psychic feedback that forces the beasts into physical form.

At first glance, a nihilimentis appears as nothing more than a jittering smudge of ectoplasm.  As the viewer concentrates, the wispy material congeals into a vaguely quadruped conglomeration of haphazard, monstrous insect parts…

Arcana DC 20:  Nihilimentii were created by the primordials to destroy the intelligent creations of the gods.  As deadly as any dragon, a nihilimentis lashes out at anything that pollutes its territory with psychic vibrations.  Only through intense concentration can one force the monster into solidity and have any hope of defeating it.

Arcana DC 25:  Nihilimentii were once part of a continent spanning swarm, but thankfully, the war and the eons have reduced their numbers significantly.  Nihilimentii are now solitary creatures, driven to the lonely corners of the world and desolate regions of the elemental chaos.

[m] Brush with Nihility (minor; at-will) ◊ Psychic
+19 vs. Reflex; the target slides 1 square and suffers a -2 penalty to defences (save ends)

Blink of an Eye (immediate reaction, when an enemy within the nihilimentis’ mental drone aura ends its turn without spending a minor action to focus its concentration on the nihilimentis; at-will) ◊ Teleportation

The nihilimentis teleports to a square adjacent to the enemy and makes two ectoplasmic claw attacks; the nihilimentis becomes insubstantial until the end of its next turn

A nihilimentis brutally slashes its foes with its quasi-real claws, leaving bits of twitching ectoplasm behind in the wounds. In combat, it closes with the nearest cluster of enemies, positioning itself to utilize mental drone and blink of an eye to the greatest effect.  It first attempts to weaken a pair of foes with brush with nihility before using an action point to blast them with mindwipe swarm.  While waiting for mindwipe swarm to recharge, the nihilimentis spreads its attacks to take advantage of the ongoing damage of its ectoplasmic claw.

Nihilimentii are typically solitary but have been known to tolerate the presence of barely sentient constructs, beasts, and undead in their lairs.