Skip to content
Home / Delve into the Depths in the Kobold Blog / More Giant Ants: A Supplement to KQ#15 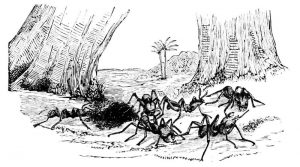 Check out the “Ecology of the Giant Ant” in Kobold Quarterly #15 for more on these fearsome monsters.

There are over 12,000 species of ants in the world, each with their own idiosyncrasies. Giant ants are slightly less common than ordinary ants, but they too are varied in their habits. Presented here are four variants of the giant ant, each slightly different than the standard giant ant (see Pathfinder Roleplaying Game Bestiary). None are so different as to require a new stat block or even a different CR.

While most insects are not well suited to an aquatic life, the giant aquatic ant actually thrives underwater, remaining submerged for up to 1 hour at a time, utilizing hairs on its black exoskeleton to trap air that it can then breath…

While not every aquatic ant nest is found underwater, many of them are. The queens build the entrance to the nest under the roots of mangroves and other trees found near the water’s edge. These tunnels often flood, requiring the ants to move their young frequently, as the larvae and pupae cannot survive being submerged for long periods of time.

This species feeds on dead fish, crustaceans, large turtles and other animals living in or near the water.
Giant aquatic ants gain a natural swim speed of 15 ft. and the special ability ant diver:

Ant Diver (Ex) The aquatic ant can survive submerged for up to 1 hour before it needs to leave the water. After 1 hour, the aquatic ant is subject to the drowning rules as normal.

Giant blind cave ants have a pale yellow exoskeleton covered with fine white fibers. The workers and soldiers of the species have no eyes at all. They maneuver through life entirely dependent on their feelers for information about their environment. These ants live deep under the earth, in rocky tunnels, feeding on fungus and other subterranean life forms.

They are not overly aggressive and only attack creatures smaller than themselves, such as goblins, rats, and halflings. However, like all ants, when one is injured, all the ants nearby become aggressive.

Neither the drones nor the queens of this species have wings. When two colonies meet, they exchange drones that subsequently fertilize young queens. A single colony of blind ants can have up to five queens of various ages, and many of these colonies are hundreds of years old with well-established fungal farms and well-trod tunnels.

(Cave ants are not the only species of blind ants. Some army ants are also blind. Regardless of the exact species, all blind ants have tremorsense 60 ft.)

Most crawling insects cannot survive in the heat of the desert. Giant desert ants are an exception to this rule. These ground-dwelling, light-brown giant ants are most active in the morning and evening. They remain in their nests during the cold of the desert nights and the hottest parts of the day.

When they do exit their sandy tunnels and trek the burning sands, their long legs keep them far above the hot soil, and they reduce the heat that reaches their bodies by using only their middle and back legs when they walk. Furthermore, they produce chemicals that allow their body to survive intense temperatures.

Though they most often survive by scavenging the corpses of creatures that perish under the glare of the desert sun, they are not above attacking smaller prey.

These aggressive, long-legged giant ants are bright red with small black abdomens and large mandibles. Their exoskeletons appear granulated on both the head and thorax although the abdomen is quite smooth.

The jumping ant species has no smaller caste of workers and two castes of queens. As their name implies, they are capable of prodigious leaps.

Small colonies of jumping ants make nests near giant trees, digging elaborate tunnels supported by the roots. They can leap into the air to attack large birds and often hop when excited.

Each small colony has a founding queen and a group of workers capable of laying eggs. These egg layers are called gamergates. Gamergates are not much larger than the regular jumping ant and receive no special template. Their uniqueness is their ability to lay eggs after mating with drones from their own tribe.

Each giant jumping ant has a +12 racial modifier to Jump checks. They also gain the Pounce special ability.

Each ant species featured in “The Ecology of the Giant Ant” is based on a real ant, and most of them are named for these real-world counterparts.

Army Ants: Army ants have no nest. Over 250 types of army ants are found the world over. Eciton burchellii is the archetypical army ant.

Carpenter Ants: If you have black ants in your home, you likely have carpenter ants. There are over 1,000 species of carpenter ants. Common in the U.S. is Camponotus pennsylvanicus.

Death Ants: Several species of especially venomous ants are worthy of notice. The toxin of the jack jumper ant, Myrmecia pilosula, is responsible for more deaths in Tasmania per year than spiders, snakes, wasps, and sharks combined. The giant death ant is loosely based on the fire ant (Solenopsis) of my childhood.

Exploding Ants: Perhaps one of the most remarkable of the ant species listed, exploding ants really exist. At least nine species of carpenter ants in Southeast Asia “explode” when they are losing a fight. Camponotus saundersi is one such species.

Gliding Ants: Gliding in ants was only recently discovered in Cephalotes atreus, a species from the Peruvian jungles. Though gliding ants are too small to knock anything over when they fall out of their trees, they can usually glide back and land on the trunk of the tree they fell from.

Gravel Ants: Gravel ants (Iridomyrmex purpureus), also called meat ants, are common in Australia. They earned their nickname from the practice of farmers leaving carcasses on the ant nests to clean the bones.

Honey Pot Ants: Though they are mentioned only in passing in the Ecology, the honeypot ants of Australia are truly enjoyed as food. These ants are fed by their fellows until they are the size of a grape, after which the ant colony feeds from the nectar they produce.

Trap-Jaw Ant: The several species of trap-jaw ants are quite fearsome: The mandibles of Odontomachus bauri are the fastest moving jaws in the world, reaching speeds of up to 143 mph and exerting tremendous force.

Tree Cutter Ants: Tree cutters are based on the smaller real life leaf cutters, of which there are 41 species. Atta sexdens is a good example of a leaf cutter.

3 thoughts on “More Giant Ants: A Supplement to KQ#15”