Skip to content
Home / Delve into the Depths in the Kobold Blog / Midgard Notebook: Villains and Corruption 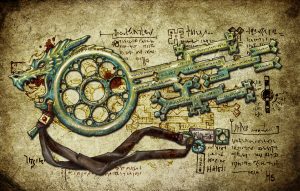 One of the great elements of Midgard since the earliest days has been its villains and cults. These draw their power partly from their magic and secrets but also from the flaws of each heroic race. In particular, cults and villains thrive because humans are especially susceptible to corruption, such as by devils, ancient shadows, and simple greed, fear, and wrath.

That theme continues in the revised Midgard Campaign Setting with an emphasis on the cults and secret societies that infest all parts of Midgard. I’ll briefly discuss three of the highlights here, including the new role of shadow as an agent of corruption.

While Midgard has its share of horrific demons—hello Mechuiti and Qorgeth and Alquam and Camazotz!—and their followings sometimes blaze a trail of terror and destruction, the more civilized parts of the world can defend themselves from the blatant, overt threat of demonic power: goblin armies, doomspeaker antipaladins, and creatures of pure chaos tend to stand out on a city street.

By contrast, mercantile hubs like Zobeck and centers of learning like Friula are quite susceptible to the blandishments of envy, greed, and lies from Mammon’s servants or the wordy snares of Totivillus. So the great danger to the home cities and the ruling nobles is often a danger found within the walls: a selfish child turned into a cruel young man and into a ruthless king, bent on power and greed. A merchant prince who wishes not to deal fairly but always to have more than any rival. The human heart is the key that unlocks the door to evil in Midgard, and the plots and schemes of devils are common there.

We’ll see more of this in the chapter on Zobeck and the Crossroads. 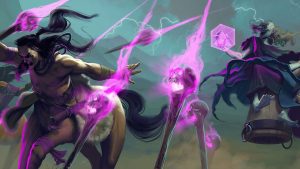 In addition, the shadow fey and their Queen of Night have returned to Midgard as the power of the elves has faded away. This means that they are recruiting servants, toadies, and those who gleefully gloat whenever they have the upper hand: snooty artists, arrogant nobles, clerics who are certain they see the truth when all others are fooled by common rumor and ordinary learning.

Superficially, their appeal is similar to that of devils; in the case of shadow fey, they grant direct gifts of magic and power and can increase the charisma and status of their friends tremendously through fey glamours and items. At the same time, they know where the levers of Valeran power were built. The heralds of blood and shadow, the increasing prevalence of shadow magic, the welling of black energies in the heart of old elvish ruins… the shadow fey are one of the great sources of civilization, magical learning, and secrets from the age of elves. But their sense of superiority and their elitism mean that in the end, the only ones who profit from their secrets and manipulations are the Moonlit King and their dark queen.

We’ll learn more about these dark gifts and their price in the Shadow Realm chapter.

The void speakers are increasingly common in Midgard, those who dare to traffic with the same power that summoned the Elder Walkers in the Western Wastes. Void dragons have been seen in the Northlands, and some believe Loki or the giants are inscribing dread runes in hidden ley line junctions: atop mountaintops, at the confluences of rivers, even deep within ancient glaciers and in the foam of the Boiling Sea. What end do they serve? Void speakers whisper horrible answers to every question, driving their listeners to terror and paranoia. Their numbers seem small, but combined with other threats walking through worm-ridden passages in the World Tree and lich-giants speaking to dark gods, it is clear that they are stirring up evils put down long ago.

We’ll learn more of this in the chapter on the Northlands and Hyperborea.

That’s it for this time; I hope to share more design notes with you soon!