Skip to content
Home / Delve into the Depths in the Kobold Blog / Journeys to the West: The Isle of Morphoi and Its Creatures (Part 3) 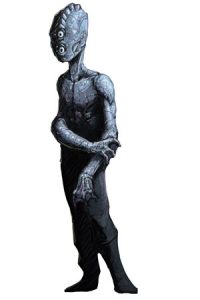 In our ongoing look at the Isle of Morphoi, we take a look at the Nethysule, which has been illustrated by Chris McFann. You can venture beyond the jump now to read the entire entry, and then head over to the Journeys to the West Kickstarter and join the crew if you want to see more about this area of the world! You can also take a look at the Part 1 and Part 2, plus maps.

This blue-purple-skinned humanoid wields a quarterstaff. It has vertically placed eyes and a ridged forehead.

Nethysule are androgynous, asexual, plant-based creatures indigenous to the Isle of Morphoi. Their appearance is similar to the natural form of their morphoi cousins, but their ridged heads and purple-tinged skin delineate the two from a distance. Unlike the morphoi, the nethysule cannot change shape and do not possess an additional set of eyes in the back of their heads.

The nethysule are generally peaceful creatures, preferring to avoid combat whenever possible and keeping mainly to their druidic circles. They tend to the area’s flora, creating beautiful garden patches throughout the Isle of Morphoi.

Believed to be creations of Nethus, many of the nethysules’s circles (the more chaotic neutral ones) once served the sea deity’s whims. All nethysule still revere the sea god and make weekly offerings of small crafted items to the sea. None have seen or heard the god for some time now, and they do not understand why Nethus abandoned them. Because the violent lamia kill them for sheer sport, the nethysule keep away from Temple of Mnemosyne, and so have not learned anything about Nethus’s disappearance from the priestesses there.

The nethysule gather nutrients from the sun or through an intake of organic carbon, so they do not need to eat (and do not necessarily need sunlight to survive). They live in small druidic communities on their home island called circles. Some communities might be underwater, since they are amphibious creatures. Approximately 1 in 15 nethysule are druidic leaders (with at least 7 druid levels).

Plant Traits: The nethysule are a race of plant people. See the universal rules for plants.

Wild Children: The nethysule gain a +2 racial bonus to Stealth and Survival checks. Additionally, they receive a +8 bonus to blend in with vegetation.

Spell-Like Ability: A nethysule can use sanctuary three times per day as a spell-like ability. The caster level for this ability equals the nethysule’s class level.

Languages: Nethysule begin play speaking Common. Those with high Intelligence can choose any language as a bonus language. The nethysule can speak with plants.

Like this creature? Want to write a published adventure about it, or propose a better one? Join the crew of the Journeys to the West project!

3 thoughts on “Journeys to the West: The Isle of Morphoi and Its Creatures (Part 3)”