Skip to content
Home / Delve into the Depths in the Kobold Blog / Journeys to the West: The Isle of Morphoi and Its Creatures (Part 2) 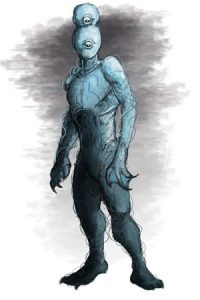 Journey back to the Isle of Morphoi and spend some time with the creature for which the island is named. Designer Christina Stiles has provided you with some statistics and Chris McFann has illustrated this creature so that you can begin your seafaring adventures right this second. Of course, if you want more, you should set sail for the Journeys to the West Kickstarter page and make a pledge. (We thank those of you who have already joined the crew — the project is now fully funded!) If you missed the first part of this series, venture over to Part I and see the lamia Mnemosynian matriarch. And watch the blog tomorrow for a sneak peek at maps! Now, without further ado, get your spyglass out and take a look at the morphoi (beyond the jump).

This blue-skinned humanoid wields a trident. Its unusual vertically placed eyes are the only features on its face.

ECOLOGY
Environment any, the Isle of Morphoi (homeland)
Organization solitary, gang (2–10), or tribe (10–60 plus 1 chieftain)
Treasure standard (trident or shortbow, other treasure)

SPECIAL ABILITIES
Immunity to Temporal Effects (Ex) The morphoi’s strong connection to Mnemosyne have made them immune to all time-related spells and effects (including time stop, temporal stasis, sands of time, and the like).

Morphoi are shapeshifting, plant-based creatures indigenous to the Isle of Morphoi, which bears their name. They are often mistakenly called “faceless stalkers,” which are an entirely different and dissimilar shapeshifting race (ugothols) sometimes encountered throughout the isles of the West. In their natural forms, the morphoi appear to be light-blue, Medium-sized, androgynous beings of about five and half feet tall. The morphoi’s elliptical-shaped heads have no facial features (no chin, forehead, or nose), mere slits for ears, and vertically placed eyes at the upper and lower parts of their heads. The nethysule, a nonshapeshifting distant cousin, do look almost identical to the morphoi, and for this reason, morphoi encountered in their natural form are often mistaken for the more peaceful nethysule. Unlike the nethysule, however, morphoi have an identical set of eyes in the back of their heads. When harmed, the creatures bleed a dark red, saplike substance.

The morphoi gather nutrients from the sun or through an intake of organic carbon, so they do not need to eat (and do not necessarily need sunlight to survive). While in humanoid form, however, they consume small amounts of food to aid their pretense, but this food offers them no sustenance.

Morphoi live in communities on their home island or in the water surrounding it, since they are amphibious. Many leave the island upon successfully wiling their way onto a ship, posing as beautiful women or stranded travelers. Unlike doppelgangers, they do not have the ability to mimic others or read their thoughts, so they create new backgrounds for themselves. All of the morphoi serve and venerate Mnemosyne. They willingly give their lives to protect her and her handmaidens.

Approximately one in thirty morphoi are chieftains (with at least 5 class levels). The group has several rangers, shamans, and witches among them. Those chosen as infiltrators often have rogue classes. When the morphoi shapeshift, they keep their additional eyes, placing them on an advantageous part of their body (back of the neck or the back of a glove-covered hand, for instance). They prefer to see in various directions at once.

Join the Journeys to the West crew now and seek out your adventure over on the Kickstarter page.

10 thoughts on “Journeys to the West: The Isle of Morphoi and Its Creatures (Part 2)”