Skip to content
Home / Delve into the Depths in the Kobold Blog / Warlock: Pact of the Key 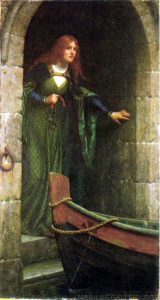 In this fifth edition compatible pact, you can customize your warlock so that he or she can gain access to interesting locations.

Your patron gives you a set stylistically suitable keys. Archfey provide you with keys of carved wood or polished multihued glass while fiends give you keys of iron and bone and jagged edges; the Great Old One grants keys of twisting matter that change even as you look at them. These keys exist in the otherworldly space of your patron and can be called to your hand with a thought as part of an action. If you drop these keys or otherwise relinquish them, they return to their extradimensional space. The keys function as thieves’ tools, and you add twice your proficiency bonus when using them. You are not proficient with other thieves’ tools unless you have gained that proficiency by some other means. Portals that can lead to a realm associated with your patron that normally require an activation word or object can also be opened with these keys as if you met the qualifications for its use.

You can cast arcane lock or knock at will without expending a spell slot.

You can dispel hold person or hold monster as an action.

5 thoughts on “Warlock: Pact of the Key”