Skip to content
Home / Delve into the Depths in the Kobold Blog / Journeys to the West: The Isle of Morphoi and Its Creatures (Part 1) 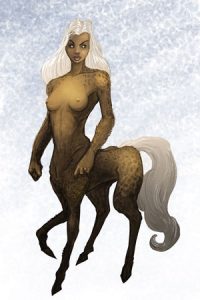 Adventure! Excitement! These things and more await you in Journeys to the West, a Kickstarter project by Open Design. The project, which you can help fund as of this writing, will have six adventures for the Pathfinder system, and it plans to give adventurers of levels 1 to 12 plenty of opportunities to explore and tackle the dangers in Midgard’s Western Ocean. To kick off this Kickstarter (groan if you must!), designers Brandon and Christina present you with the Isle of Morphoi and statistics for the lamia Mnemosynian matriarch. (Our lamia here was illustrated by Chris McFann.)

When the rage of Nethus failed to quench the divine fires of Kammae Straboli’s empowered soldiers, it was not without consequence. The battle that enslaved and chained the sea god inflicted other casualties more subtle but no less earth shattering. The wife of Nethus, a deified siren queen named Mnemosyne who holds dominion over memory and time, was also assaulted. Failing to kill the goddess, the Kammaen inquisitors’ bindings removed from her mind any trace of their crime or the methods they used to capture Nethus. So Mnemosyne—the very embodiment of memory—suffers a memory gap. She cannot recall the events or any thoughts of Nethus, but she knows something is missing. The handmaidens who sought to protect her were cursed into horrid forms: the first lamias to walk Midgard. No one knows how they came from those events to the Isle of Morphoi.

The isle is a lush land, but tall cliffs and no ports mean most consider it uninhabitable and nigh unapproachable by sea. Monstrous creatures guard its waters, with chuuls, charybdises, dire sharks, and even scyllas reported by those brave enough to venture close. These same sailors describe cliffside homes and dangling canoes that hang like swallows nests along the coast, and beautiful women are among these homes. Such sightings give rise to improbable tales of an island of amazonian, enchanting seductresses, but such tales are closer to the truth than most know.

Farther from the coast, monasteries and lush gardens punctuate the island, and a central temple built in classical columned style stands proudly at the isle’s center. Within, Mnemosyne holds court among her lamia handmaidens and devoted servants. The goddess is consumed with reclaiming the memories she knows she has lost. As a result of this obsession, her dominion over time has slipped, and this causes instability on the island. Each new morning, explorers are as likely to encounter ancient extinct beasts, from dinosaurs to mega-fauna, as they are strange metal constructs, primitive cavemen, Cyclopes, and unusually dressed men wielding strange, vril riflelike weapons that loudly discharge hot slugs of metal. Those who have the goddess’s favor remain stuck in time, even as it shifts around them, and although buildings and geography are typically unaffected, lush patches of jungle can spring up overnight, only to be dry desert the next day.

Servants of Mnemosyne include the lamia, the lamia matriarchs, and the Mnemosynian matriarchs—once beautiful nymphs now twisted in mind and body—that serve her every need. Her worshipers also include the island’s original inhabitants, the morphoi. These latter creatures are also erroneously called ugothols (another race entirely) or faceless stalkers, and entire tribes of these strange, shapeshifting creatures are enthralled by the goddess and devote their lives to her service. Most take the forms of beautiful humanoid women, since this pleases Mnemosyne, and all strive to retrieve her lost memories and restore her to her rightful place as the unblemished goddess of memory.

To accomplish this, her handmaidens and morphoi servants disperse throughout Midgard, infiltrating courts and whorehouses alike, in hopes of capturing those with some knowledge of the true nature of events that led to Nethus’s capture and the mental damage done to their goddess. The Wisdom damage inflicted by the lamia matriarchs (both types) also causes memory drain. Many servants and nobility among the Seven Cities forget entire spans of days after keeping company with a strange visitor.

Mnemosyne’s servants also employee terrible crablike creatures known as Neh-Thalggu, powerful sorcerers who rip memories from the harvested brains of those they suspect know something of the events that waylaid their queen. When such agents return to the island, they sit with the goddess and recount all they know in meticulous detail. Should the goddess ever discover the secrets behind the imprisonment of Nethus, Mnemosyne would move immediately to free her husband, and the wrath of the sea god toward his captors will be mighty indeed.

Mnemosyne’s greatest handmaidens, these lamia have received some of their goddess’s abilities over time and memory. After the Kammaen inquisitors cursed them, these beautiful women twisted into forms resembling small centaurs. They have the upper torso of a fey-looking female, and their lower bodies are that of a painted (or spotted) pony-sized horse. When encountered in their natural form, in fact, most individuals believe them to be adolescent centaur females, and the lamia Mnemosynian matriarchs use this fact to their advantage by often pretending to be exactly that: docile centaur youths playing about their island home—but they are truly the deadliest of all the lamia.

The desire to recover their goddess’s memory consumes these matriarchs, and they use subterfuge, including infiltrating other governments and exploring other lands in human form, to uncover clues to unlocking Mnemosyne’s mind. They also seek to regain her mate, by whatever means necessary. Those encountered on Morphoi protect the goddess and her temple, oversee territories or other races on the island, or deal with new arrivals to the island.

Like their lamia matriarch cousins, they can move with shocking ease from silken-tongued temptresses to dervishes, striking with all the deadly precision of vipers. They also enjoy luxuriating in gory feasts, violent trysts, and bloody entertainments, reveling until their playthings are broken or until they tire and move on.

Interested in more locations and creatures of the Western Ocean? Venture over to the Journeys to the West Kickstarter page and join the crew!

7 thoughts on “Journeys to the West: The Isle of Morphoi and Its Creatures (Part 1)”