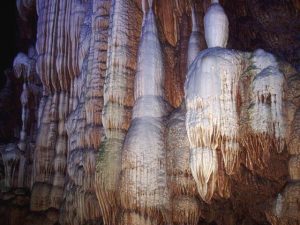 Weather—the physical state of air in the natural environment—occurs hundreds of feet below ground, blowing, baking, fogging, and pouring over the pitch black of the Underdark. For those brave enough to venture there, confront its denizens, and reap its treasures, remember just three words: mind the weather.

As one enters the Underdark, perhaps through an innocuous looking grotto, a cooling breeze tickles sweaty faces as the dominion breathes, exhaling when air pressure at the surface drops, and inhaling when it rises. Depending on its direction, the breath can be sweet and smell of forest, or it could be foul, reeking of guano, oozes, and sulphur. Deeper in the dark, within confining and twisting tunnels, the breeze becomes howling windstorms, checking progress, snuffing open flame, limiting communication and ranged attacks, and threatening to put one on their backside or worse. The unique nature of this realm means winds also deliver dust, spores, or cave dwellers, with aggressive molds and fungi, and dislodged and airborne spider colonies a commonly reported hindrance.

The air grows hotter the deeper one ventures into the Underdark. Surface conditions succumb to heat radiating from below, which thinkers imagine to be a sea of fire beneath the rock skin of the world—a place where unspeakable monsters exist. On Earth, cave air increases in temperature one degree for every seventy feet of descent—a potential baseline for any world—with temperatures over 90 degrees Fahrenheit forcing Fortitude checks against heatstroke and fatigue. Compelling characters to strip armor, hot air also drains water reserves and spells (such as endure elements), and, when it collides with cool, dry surface air snaking its way underground, fog appears.

Fog in the Underdark, like that which forms above ground, limits visibility, including darkvision, to five feet. Unlike low-lying clouds and ground mists that appear at the surface, Underdark fog is caustic, inflicting acid damage, and it leaves a slimy residue in its path, making an already treacherous route all the more slippery, plus threatening and increasing the chance of falling damage. Of course, down there, some mists and fogs are far from natural. Such aberrations are beyond the scope of this weather mage’s concern, though, and are best left to dungeoneers and other such hard folk. As caustic as the Underdark’s fogs are, beware the rain.

Rainbows are unwelcome in the bleak branching spongework of the Underdark. Colors seem to drain, leaving dreary shades of gray in their stead. Even rain in the Underdark is corrupted, often running black. Beginning cool and clear, surface water percolates through porous rock. Trickling into the vast web of caves, caverns, and passageways, the water absorbs the Underdark’s essence, becoming caustic, discolored, hot, and poisonous. When the tainted water finds openings and chambers, it drizzles, spalling living rock, pitting metal, and dissolving flesh. In some areas of the Underdark it pours down, often accompanied by the thunder of rock-fall. Inflicting acid damage, cutting visibility in half, and extinguishing flame, the rain limits ranged weapons, and impacts Search, Spot, and Listen checks. Gathering in crevasses and shafts, the water forms nasty natural traps, and drow have been reported to collect the rain for nefarious purposes, with one contraption’s trigger described as opening a spillway from a chamber full of the water.

For the GM, weather in the Underdark reinforces the mood of the sunless realm, and it can offer alternative challenges or supplement encounters. To player characters, the Underdark’s weather is another reason to be very afraid. Adventurers of all levels will be reminded of how hard it is to keep a torch lit, how hot wearing platemail can be, and how unsure their footing really is. And that’s all before the kobolds, driders, and drow show up! So, how’s the weather in your neck of the Underdark?

5 thoughts on “Weather in the Underdark”