Skip to content
Home / Delve into the Depths in the Kobold Blog / Humpday Hazard: Barrenblight 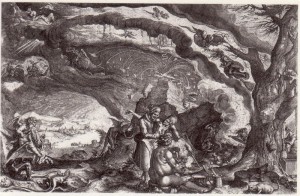 The taking of mortal lovers by succubi is a legend that many dwellers of the Material Plane are familiar with. Fleeting paramours by nature, succubi are fabled to seduce men and women only to achieve petty, shortsighted ends.

However, it is less known that some succubi take a single partner for extended periods. Those chosen for these ill-fated entanglements are typically important members of the community the succubus wishes to disrupt and often include faithful spouses, devoted parents, skilled artisans, and prominent nobles…

Occasionally, a succubus becomes pregnant as a result of such an affair.

The birth of a mortal child to a succubus mother is terrible to behold. It is an upheaval fraught with tears, blood, shrieks in daemonic tongues, and curses against gods wise mortals dare not tempt. If this birth occurs on the Material Plane, a perpetual taint known as barrenblight washes over the site, rendering creatures exposed to it ill and infertile.

Demonologists claim that areas of barrenblight, while small, can spread to claim entire villages, cities, kingdoms, and even continents. Some point to the lifeless wasteland of Shoath-Forbei as an example, insisting that the once-verdant region was consumed by barrenblight many centuries past.

It is also said that if Vivika, the Succubus Queen, gives birth to a human child at a special site on the Material Plane, all living creatures will immediately become sterile.

The musk of a star-crossed romance long since consummated lingers in this shadowy glen.

Hazard An unmentionable odor radiates in a 2-square aura from a bleak landmark, such as a dead tree or weather-stripped monolith; living creatures that succumb to the aura’s effect become ill and gradually lose the ability to reproduce
Perception

No check is needed to notice the landmark; living creatures entering the hazard’s aura detect the odor.
Additional Skill (Heal)

◊ DC 22 + 1/2 level—You recognize the nature of the landmark and the aura
Trigger When a living creature enters or starts its turn in the hazard’s area of effect, it attacks

Attack
No Action           Close burst 2
Target The triggering creature
Attack Level + 5 vs. Fortitude
Hit Normal medium necrotic and poison damage by level, and the target contracts barrenblight (see below)
Effect The target’s healing surge value is reduced by 1 per tier until the start of its next turn; this effect does not apply to creatures already suffering from barrenblight

Countermeasures
◊ With a minor action and a DC 17 + 1/2 level Endurance check, you can make yourself immune to the effects of the barrenblight until the start of your next turn; you may attempt this check only once per round

◊ If a silver music box is played for one minute within the barrenblight’s area of effect, the hazard dissipates.

Living creatures instinctively avoid areas tainted by barrenblight. Characters of the primal power source can sense the anguish of nature spirits that dwell in these areas—spirits who might regale travelers with the history of their torrid planar affairs.

Succubi who give birth to more than one mortal scion often erect permanent birthing chambers in remote temples or dungeons hidden deep below the surface. Ghouls are the most common guardians of these dismal altars, but many succubi look to vampires and even golems for protection. In rare instances, a demilich serves as a doula for especially powerful succubi, using the souls it has trapped to nourish the infant and its mother after it is born.