Skip to content
Home / Delve into the Depths in the Kobold Blog / Warlock’s Apprentice: The Drownstone Road 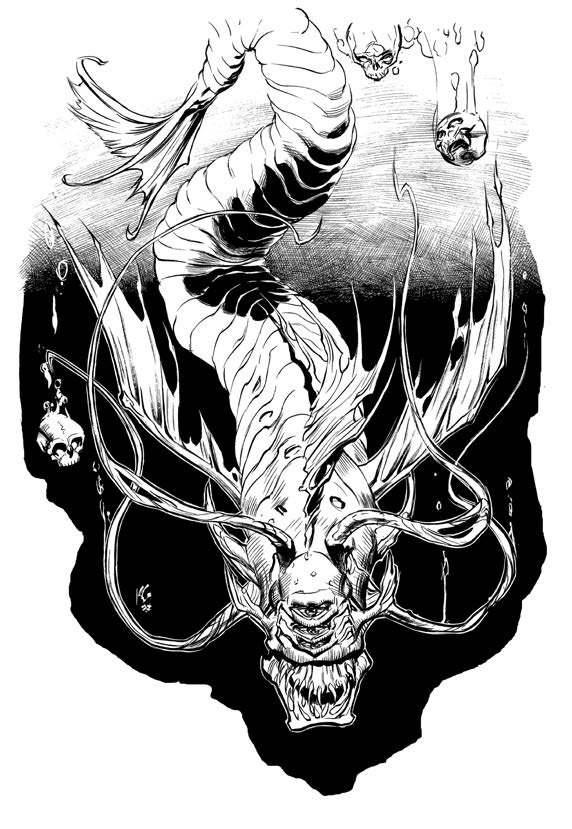 None living know for sure what caused the fall of the great northern dwarven kingdom. Some say that the dwarves lost their way. Forged on the adamantine anvil by the smith god Volund and the thunder god Thor, they were created to be warriors in Wotan’s battle against the wild elves of Thorn. As they cut down giants, fey, and elves alike, it is said that they became too proud, and this pride was their undoing. Others claim that the fire in their hearts burned less for battle and more for the forge, that as they laid down their axes and took up the crafting hammers, favoring Volund over Thor, and the thunder god became angry and punished them for forsaking their purpose and allowing their worship of him to fade.

Whatever the cause, know that more than five thousand years ago came the Reaving, and the great northern kingdom fell. Now the dwarves are split between the reavers in the north and the cantons in the south, and between them, the Nieder Straits. The great bulk of that once proud kingdom was buried in the deluge known as the Reaving, and the bottom of the straits are crisscrossed with a maze of sunken buildings, flooded holds, ancient palaces, and subterranean caverns—ruins enough to house the detritus and treasures of an entire civilization.

Describing the full extent of the Drownstone Road is beyond the humble limits of this discourse, but a portion merits elucidation here. Black Tooth Tower does indeed lead to the road, but the tower itself is the jutting prominence above a now sunken fortress, and the area has become the domain of a nihileth (see Tome of Beasts), returned from its eons-long journey across the golden heavens and nine hells to spread its void corruption on the world of Midgard. The nihileth dwells in the bottom reaches of the fortress, but its minions, nihilethic zombies, roam the upper corridors. These ghoulish beings exist in a dual state, shifting between the material and the ethereal. They stay in their ethereal form most times, but when the moon is a sliver, it is they whose ghastly shadows are seen crossing the ghost lights in the water’s depths. Any who would visit the Drownstone Road from here must find their way by stealth or strength past these unfortunate souls and their monstrous master.

But the fortress itself sits at a nexus on the Long Road, the subterranean passage between two vast holds. Partially flooded, home to abominations and deadly sea creatures trapped in pools of water between pockets of air, the road connects Mótsognir’s Hall and Glámr Hall. Once proud dwarven holds, now they are the domain of undead vættir. Both great kings in life, Glámr is a wrathful, miserable creature, jealously guarding the cursed treasure in his hoard against any who disturb his unquiet rest. But Mótsognir is a rare, bone-white vættir, full of regret for the lost honor of the dwarves, who reserves his fury for those of a faithless and deceitful character. Stern and unyielding, if Mótsognir can be enticed into dialogue, it is said that he knows many secrets and sagas from the days of the fallen kingdom. But whether he would share such knowledge depends on his estimation of the character of the seeker, and should he suspect dishonorable motives, woe betide any that come into his hall.

Recently, Jorunn of Skaldhome went into a trance and sang a ballad not in his repertoire. In it, he appeared to suggest that Mótsognir or Glámr, one or the other, possesses a rare weapon, a soul-forged hammer that contains a remnant of the soul of an ancient dwarven law-speaker. This hammer, should it be claimed, is said to know the present-day location of the golden Axe of Forseti. But anyone brave or fool-hearted enough to seek such a treasure would have to brave the nihileth fortress, the horrors of the Long Road, and the two vættir halls.

Hazards of the Nieder Straits

The following hazards may present themselves when navigating the Nieder Straits.

A geyser of steam rises violently out of the water nearby. Your nose and eyes sting instantly as the caustic vapors threaten to blind and suffocate you.

A 10-foot-radius cloud of persistent and spreading sulfuric steam rises from the water within 30 feet of the party. Each creature requiring air must immediately make a DC 11 Constitution saving throw or be poisoned for 1d4 minutes.

The radius of the cloud grows by 10 feet each round until it reaches 60 feet in diameter at which point it disperses. Creatures requiring air to breathe who begin their turn in the area of the steam take 11 (2d10) acid damage. Additionally, the creature must succeed a DC 11 Constitution saving throw or be blinded until the end of their next turn.

The cloud is not magical and can be dispersed and affected by spells that move air.

From below the water, a sudden spewing of lava rises high into the air nearby. The lava cools almost instantly, and large chunks of volcanic rock threaten to pummel you.

The lava gout appears 100 feet from the party. The flash of heat requires all creatures within 200 feet of the gout to succeed on a DC 11 Constitution saving throw, taking 11 (2d10) fire damage on a failed save or half as much on a successful one.

For 1 minute, large pieces of cooling lava rock fall from the sky within 200 ft. of the lava gout. A creature that begins its turn within this range must succeed on a DC 11 Dexterity saving throw, taking 7 (2d8) bludgeoning damage on a failed save or half as much on a successful one. Objects in range may also take this damage (GM’s discretion).

Ahead, the water churns menacingly. Steam rises from a great whirlpool, and you spy the boiled bones of animals and fish caught in its current.

Creatures who end their turn inside the whirlpool take 11 (2d10) fire damage.

Creatures who flee a sacred duel (hólmganga) on the Isle of Swords soon regret their choice. Wotan has little mercy for cowards, and the ancient practice of settling disputes with blood is beloved to him. Eleven hours after the creature flees the duel, it is cursed by the one-eyed god, whose divine sneer robs the creature of any future bravery.

Curse: Wotan’s Sneer. This curse imparts the following effects upon its bearer: