Skip to content
Home / Delve into the Depths in the Kobold Blog / Welcome to Midgard: Dominion of the Wind Lords 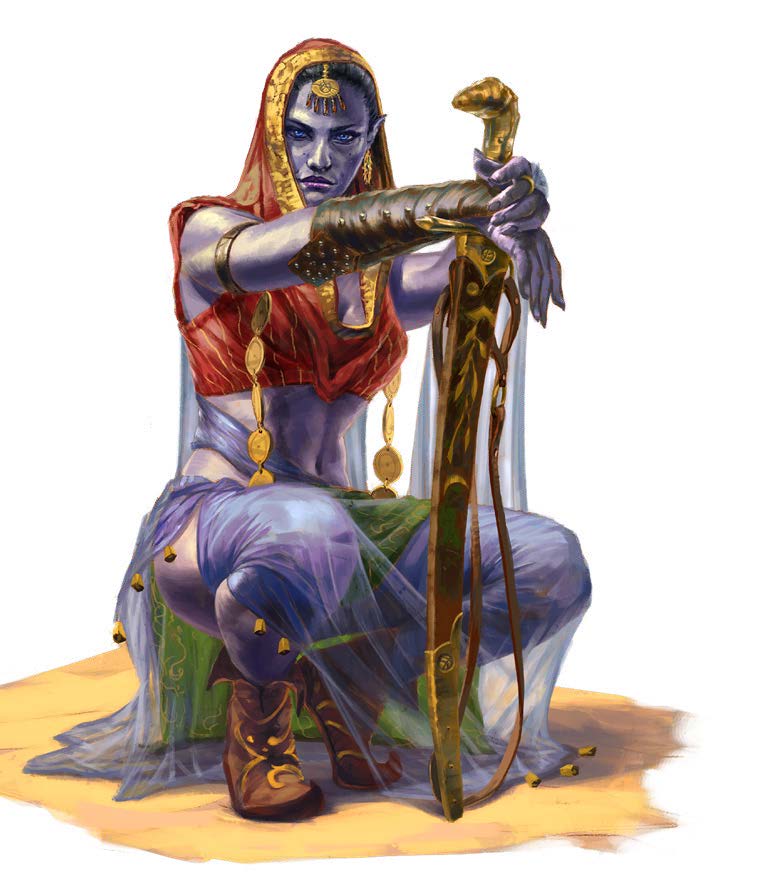 To the west of the Crescent Desert lie the harsh and foreboding lands of the Dominion of the Wind Lords. Here, the great Stone Desert stretches to the sea in sun-baked plains of red and black rock. This is a bleakly beautiful landscape devoid of the crescent-shaped sand dunes found elsewhere in the Southlands. The seemingly barren Stone Desert hides bubbling springs, seasonal waterholes, and a scattering of precious oases.

DOMINION OF THE WIND LORDS

Ruled by the Wind Lords and home to living nature spirits, the enigmatic jinnborn, and the Tamasheq, the Dominion’s days of greatness are long gone. Once, the region boasted the Moon Kingdom of the minotaurs, a shining jewel of arts and learning, and the magnificent civilization of Golden Ulthar. Today the Dominion is filled with the ruins of past glories and inhabited by dangerous gnolls, treacherous elemental spirits, and secretive Tamasheq nomads as mercurial as they are haughty.

Within the Dominion, most elements of nature have an animating spirit bound to them, aware and conscious, each with its own personality and character. For the past 800 years, these spirits have fought a cruel civil war between forces loyal to the Wind Lords and those beholden to Boreas, the North Wind. The struggle’s long timeline does not make it any less dangerous for mortals who end up caught in the middle. Spirits angry with one side or the other often lash out at passing caravans, and sometimes entire tribes vanish beneath battling earth elementals. Life in the Stone Desert is never easy, and the wise take pains not to end up caught in the spirits’ epic struggle.

The Wind Lords are ancient and powerful entities from the earliest ages of the world, created from the breath of the giant Aurgelmir. While they have almost no interest in the lands outside their borders, they take an active and personal role in the Dominion’s internal affairs. Chergui the East Wind is the most benevolent to mortals, embodying the cleansing winds that blow from the sea to soothe the Stone Desert’s heat, and acting as a calming influence on his peers. Conversely, Shamal the West hates mortals and wants to drive them from the spirits’ lands. The West Wind is an enveloping gale of rocks and grit that scours flesh from bone and wears mountains into dust. Khamsin the South Wind embodies the hot winds that blow from the southern wastes. A being of extremes, both in temperature and temperament, Khamsin’s opinions float between those of his fellow lords.

Opposing these three is Boreas, the North Wind who has been reborn as a true god. He maintains a separate realm far to the north, but he often visits the Dominion to stir up trouble. Serving him are the spirits he has gathered as allies and three major Tamasheq tribes.

Scattered throughout the Dominion of the Wind Lords— and, to a lesser extent, the Crescent Desert—are insular tribes of jinnborn. Native people from the deepest deserts, the jinnborn claim they were the first mortals to walk the world. They say that in the beginning, all the world was a vast desert beneath a fiery sun; in those times, the jinnborn wandered where they willed, and ruled over all they saw. They refer to themselves as the sab siraat, or “people of the path.” Descended from powerful elemental creatures called jinn, the jinnborn manifest gifts through their lineage that help them survive their harsh home environment. Air sab siraat are proud and aloof. Fire-based sab siraat are vicious and draconian. Water sab siraat are carefree but mercurial, and earth sab siraat are stoic and driven. Even with these tendencies, though, jinnborn tribes exhibit great diversity in customs, laws, stories, and mannerisms.

Passionate people, the jinnborn seek wealth when they can, revel in revenge when they must, and cherish close companionship always. Outsiders label them as capricious or even savage, never fully aware of the veil that hides the jinnborn’s true nature. For more information on playing a jinnborn character, see the Southlands Campaign Setting or Unlikely Heroes.

Tamasheq, People of the Desert

Virtually unknown outside the desert, half a million Tamasheq inhabit the Southlands. Most live in the Stone Desert, but they are also widespread throughout the Crescent and Sarklan Deserts surrounding Nuria Natal. They speak their own hidden tongue, called Tamasheq, as well as the Southern Tongue and not infrequently Gnoll, Draconic, and Kushite. Organized into vanhu, or tribes of several families each, their lives are spent on the move from oasis to oasis, keeping herds of goats and camels and conducting trade with the Kingdoms of Gold and Salt. A secretive people, they take great pleasure in convincing the Nurians and Kushites that they are simple nomads. The truth, however, is that the Tamasheq have a thriving and advanced civilization, though they take great pains to hide this from the world. Only in their secret capital of Kel Azjer do they flaunt their greatness.

The Tamasheq display signs of their status in their long white robes and colorful turbans, their exquisitely tooled camel saddles, and their elaborate scimitars. Their prowess in surviving desert journeys gives them wealth, valuable trade routes, and a position of great influence. They are expert travelers who can ensure a caravan’s safe journey— and also raiders who can destroy even a well-defended caravan or sandship…