Skip to content
Home / Delve into the Depths in the Kobold Blog / Beyond Damage Dice: Monk Weapons, Part 2 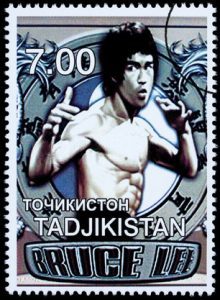 A weapon is more than the damage it deals. In combat, skilled warriors use their weapons to confuse, disorient, and disadvantage their enemies before moving in for the kill. Beyond Damage Dice ties unique maneuvers to weapons from both the core rules and the Midgard Campaign Setting, giving them a distinct impact on the battlefield. This first part of the monk weapons series presents new maneuvers that monks can use with throwing weapons and polearms.

The real-world kunai was a gardening and masonry tool, sometimes used like a crowbar or a piton by Japanese farmers. This peasant tool was eventually adopted by ninja as a short stabbing weapon. Decades of exaggeration in Japanese pop culture has transformed the kunai into a ninja’s throwing dagger—an iconic weapon for East Asian-inspired fantasy. This weapon is mechanically identical to a dagger, and a monk can also use these maneuvers while wielding a dagger.

Ascendant Grip. When you deal damage to a creature that is larger than you with a kunai, the kunai remains embedded in its body and can be used a handhold or piton. You and other monks have advantage on Strength (Athletics) checks to climb creatures spiked with at least one kunai per size category larger than Medium. A creature can remove a kunai by making a successful DC 10 Wisdom (Medicine) check. You can spend 1 ki point as a reaction to impose disadvantage on this check.

Spirit Chain. When you hit a creature that is your size or smaller with a kunai, you can spend 1 ki point to manifest a pseudo-physical chain between your body and your weapon. You can choose to pull the creature toward you by making a successful Strength check opposed by its Strength check, or yourself toward the creature a number of feet up to your movement. This chain of spiritual energy disappears at the end of your turn.

Japanese longspears, known as nagae-yari, were weapons used by samurai and peasants alike. These pikes were visually distinguished from simpler spears by their exceptionally long tangs—metallic spikes that protruded perpendicular from the spearhead—that were often as long as the spearhead itself. By the 16th century, the nagae-yari became the primary weapon of Japanese armies. This weapon is mechanically identical to a pike, and a monk can also use these maneuvers while wielding a pike, a trident, or a spear.

Disarming Parry. When a creature attacks you with a weapon, you may use your reaction to catch their weapon with your nagae-yari’s tangs and disarm them. Make an attack roll with your nagae-yari. If the result of this roll equals or exceeds their attack roll, their attack misses and they must succeed on a Strength saving throw or drop their weapon.

Pinning Lunge. As an action, you can make a single melee attack roll with a nagae-yari against a creature within 10 feet of you. If this attack hits, it deals no damage but you can attempt to pin a Large or smaller creature to a wall, the ground, or another surface by catching their clothing with the weapon’s point. This maneuver can be used against creatures without clothing at the GM’s discretion. The target must make a Strength saving throw. On a failure, the target’s speed is reduced to zero until the spear is removed. The target may repeat this saving throw as an action.

The Buddhist warrior-monks known as sōhei were among the most famous wielders of naginata polearms in feudal and medieval Japan. Additionally, female samurai known as onna-bugeisha were trained in the naginata, both to protect their family and in certain cases, such as that of the legendary Empress Jingū, to lead revolutions. This weapon is mechanically identical to a glaive, and a monk can also use these maneuvers while wielding a glaive.

Wide Sweep. By spending 1 ki point, you can select one creature that you can see. If that creature enters your range, you can make an attack against it as a reaction. If that attack hits, the creature’s movement is reduced to 0 until the end of its turn.

The shuriken was ­the most iconic ninja weapon never actually used by ninja. Shuriken were disposable, concealed throwing weapons used by samurai to distract or poison enemies before striking with a blade. The popular image of a shuriken is a bladed throwing star, but other historical shuriken included the dart-shaped bo-shuriken and four-pointed throwing needles. This weapon is mechanically identical to a dart, and a monk can also use these maneuvers while wielding a dart.

Distracting Barrage. When you make a ranged attack with a shuriken, you can spend 1 ki point to also manifest an illusory barrage of shuriken, granting you advantage on the attack roll.

Invisible Swordsman. As an action, you can make a single ranged attack roll with a shuriken against an enemy that cannot see you. The range of this attack is doubled. This attack does not reveal your location to your target, and the shuriken cannot be found unless a creature makes a successful DC 15 Wisdom (Perception) check to search for it.