Skip to content
Home / Delve into the Depths in the Kobold Blog / Bait & Switch: Tempting the Greedy 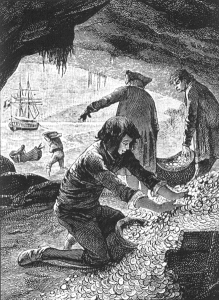 Every trapsmith knows that a trap is little more than a complicated piece of furniture or decoration until it springs to life and reminds people why no one comes down this way. That is why, over the years, many clever trapsmiths have found ways to bait their traps or even install traps into tempting targets for would be thieves.

(See the “Traps” section in Chapter 13 of the Pathfinder Roleplaying Game for costs associated with adding spells to traps.)

In a dungeon or community where many of the inhabitants are immune to poison, it’s not surprising to find that many of them coat their coinage in a thin film of contact poison. Handling a single coin is not enough for a harmful dose while five or more is enough for a single dose, and every five coins afterwards is yet another dose. A detect poison spell is more than enough to discover the poison on the coins…

Note Simply wiping or cleaning the coins with a damp rag while wearing gloves is enough to remove the poisons.

The magic mouth spell is often utilized merely to ward off would be intruders. Particularly malicious dungeon keepers, though, use this spell to lure would be robbers into a veritable gauntlet of death. Most of the time the magic mouth is placed just out of sight or down a long corridor in order to be triggered without alerting potential victims. Other times it will be placed on an inanimate doll or statue made to look real in order to lure heroes to rescue a distressed victim that actually isn’t there.

Illusionists can make for very dangerous trapsmiths and dungeon keepers. Beyond the usual trick of disguising pit traps as a normal part of the floor, clever illusionists will add illusory piles of gold, fake images of denizens roaming the dungeon, and images of prisoners. The default spells for this trick are programmed image and permanent image. Programmed image allows the trapsmith to lay illusions that come to life when triggered and is preferable when imitating living bait while permanent image is better when the trapsmith can control the image or when quiet and motionless bait is all that’s required.

The adventurer’s tendency to pry priceless gems from their original settings in walls and statues is one that can be taken advantage of by a good trapsmith. By attaching the gem to the trigger of the trap (usually a spray of burning material or a flood that drowns would be robbers), the trapsmith creates what appears to be a harmless decoration that attracts would be thieves into a deadly surprise.

One of the oldest and easiest ways for dungeon keepers to murder the curious is to attach any variety of symbol spells, explosive runes, poison darts, contact poisons, or offensive spell traps to books, scrolls, and letters. Paranoid spell casters have been known to build entire false libraries full of deadly literature to protect their hoarded knowledge.

A single detect magic is enough to ruin the surprise of many a magical trap. However, this spell only tells the caster the school of the magic being used. When combined with information indicating a positive magical benefit, this spell can actually work to the benefit of a knowledgeable trapsmith. Simply hinting that the magical aura present before the characters is a free buff zone will be enough to make the least cautious of the group stumble blindly into the trap with open arms.

More surreptitiously, magic aura can be used to directly alter the information adventurers might receive.

The gelatinous cube has always relied on the foolish to fill its nutritional needs. Dungeon keepers with the power to control and corral these creatures will place them into an area and throw tantalizing treasure into the creatures. Truly devious ooze lords have been known to add materials or breed for tempting aromas and, in at least one case, a delicious flavor. (Adventurers still gather around campfires and tell terrible tales of the strawberry flavored gelatinous cube.)