Skip to content
Home / Delve into the Depths in the Kobold Blog / Collection of Curiosities: The Street Magician’s Pouch 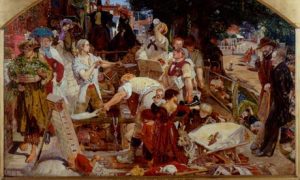 Colorful street magicians perform sleight of hand and even arcane tricks for the enjoyment of others. If you need to add a bit of dimension to such a character, perhaps add something unusual to the magician’s pouch, but consider giving the adventurers a quick glimpse of some of these! You can roll randomly for a result below, or use the handy number provided with each entry to figure out your result on a d12. You can also pick the one that works for the area in which your characters currently linger.