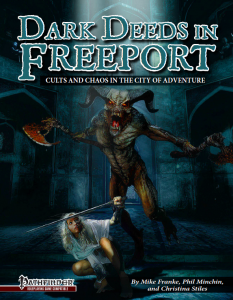 Even by Freeport’s jaded standards, the last three months have seen some peculiar happenings. Assassins easily dispatched an elven thief who had eluded them for six centuries, robbers breached an impenetrable vault, and poison claimed the lives of several well-hidden mistresses. Word has reached you that Freeporters in delicate or dangerous positions are willing to pay top coin to stop the flow of secrets…

Dark Deeds in Freeport is a five-part Pathfinder Roleplaying Game adventure arc anthology for PCs of 9th-12th level, by Mike Franke, Phil Minchin, and Christina Stiles. Follow a trail of mystery and supernatural horror from Dead Dock to Scurvytown, the Chambers Asylum and beyond to the mind-splintering secrets buried deep in the city’s pre-human past!

These all-new adventures—published under special license with Green Ronin—do justice to this classic RPG setting. To run them, the GM needs access to Pirate’s Guide to Freeport and the Freeport Companion: Pathfinder RPG Edition. (You’ll definitely want the Freeport Companion’s optional Insanity Point rules for this one!)

Pick up Dark Deeds in Freeport at the Kobold Store, DriveThruRPG, and Paizo.