Skip to content
Home / Delve into the Depths in the Kobold Blog / Book Review: A Discourse in Steel: A Tale of Egil and Nix 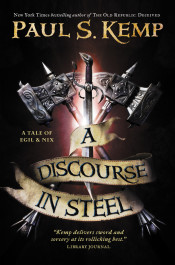 
A Discourse in Steel: A Tale of Egil and Nix is the second tale of these intriguing “heroes.” The first book, The Hammer and the Blade, introduced our world to Egil and Nix, and A Discourse in Steel makes their tale more epic. This time around, our erstwhile heroes having retired yet again, are wrapped up in a complex plot involving the most powerful thieves’ guild in town, two dear friends, and an ancient civilization. To solve their problems, they decide that kidnapping the leader of the thieves’ guild is a good idea, and high adventure ensues!

Paul S. Kemp is no rookie when it comes to writing, and the tales of Egil and Nix show just how accomplished he really is. This book has all the elements that fans of sword and sorcery should enjoy. Egil and Nix are a buddy team for the ages. The banter between Egil and Nix ebbs and flows like the tide; they have that wonderful bond that in many cases only siblings can know. It is this bond that really sets this pair apart. Few original ideas are out there, so rather than going out of his way to try to invent something new, Kemp takes one of the old standbys and does it really well.

Beyond the buddy story, A Discourse in Steel is chock full of the type of action that makes a reader curl his or her toes. Some sequences had me tense up, and I saw just the right amount of build up so the scenes never disappointed. In fact, this book doesn’t waste time on build up—Kemp jumps in feet first and keeps going until the end. There are some great fight scenes that were written so well I could “see” them. At times, reading this book felt like watching an action movie. Kemp’s descriptions of these action scenes and how the characters involved are reacting to them takes sections of this book to a new level of excellence.

A Discourse in Steel shows the sophomore blues that many second stories suffer from with two words: “fak” and “shite.” Kemp watered down his normally witty and clever writing style with these two lazy faux cuss words. Fak, or a variation thereof, appeared over 204 times while the reader is covered with “shite” around 93 times. In a book that weighs in at 352 pages, this is pitiful, especially for an author such as Kemp. I have no problem with cussing. When done right, it can be elevated to an art form, but the combination of faux cuss words and gross overuse became a distraction. By the end of this book, I cringed every time I saw one of these words. Egil and Nix are not nobility, and I understand that they would use colorful language, but this overuse got to the point where it seemed like Kemp would throw in a fak or shite rather than take a few minutes to employ his considerable wordsmithing skills to come up with a clever insult or turn of phrase.

Even with a huge steaming pile of fak and shite to wade through, this book still ends up coming out smelling like roses. The characters are deep and fun to get to know, the story is interesting, and the action is top shelf. I eagerly await the next novel in the Tales of Egil and Nix, and I hope that Kemp will man up and be as clever in his use of language as he is in writing characters and action sequences.