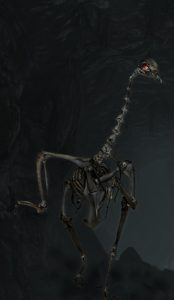 As the holiday season roars down upon us, your thoughts may turn to family, friends, merriment, and feasts. In other words, you foolishly believe you are safe. For, as you place the Thanksgiving roast upon the table, basking in the sounds of admiration and growling stomachs, an ancient evil arises. It opens its own chest to send forth its legions of bready minions while your attacks strike harmlessly against its wrinkled bones. Then as you gaze past the petrified wattle into glowing red eyes, it opens its beak and spews forth magma-like gravy to spell your doom.

Beware that which gobbles in the night.

TACTICS
Possessing a hatred of all things Thanksgiving, the Turkolich arises each year to plague the celebrating world.

Before battle, the Turkolich opens its chest cavity to release its Stuffingling minions. While these target the melee combatants, the Turkolich attacks mages and other spellcasters.

SPECIAL ABILITIES
Breath Weapon (Su): Once per day, the Turkolich can expel a jet of boiling hot gravy from its mouth, dealing 5d6 damage (DC 17 half).

Paralyzing Touch (Su): Any living creature hit by the Turkolich must succeed on a Fortitude save DC 15 or go into a turkey coma and be paralyzed by the tryptophan.

Rejuvenation (Su): When the Turkolich is destroyed, its phylactery (generally hidden in nearby poultry farms) immediately begins to rebuild the undead creature’s body. This process takes 360 days, rejuvenating the Turkolich just in time for next Thanksgiving.

Chest of Minions (Su): The interior cavity of the Turkolich creates living minion constructs called Stuffinglings. These act independently but are loyal only to their creator. Each Turkolich may create as many as 40 minions each day.

TACTICS
Stuffinglings wait within the chest cavity of the Turkolich until unleashed. Then they swarm their targets, using their Precise Strike feat and flanking to deal extra damage.

SPECIAL ABILITIES
Ingredient Poison (Ex): When a Stuffingling bites a victim, it injects a pulp of cranberries, mushrooms, and raw egg into the wound. Injury (Fort DC 13); frequency 1/minute for 60 minutes; effect sleep for 1 minute; cure 1 save.